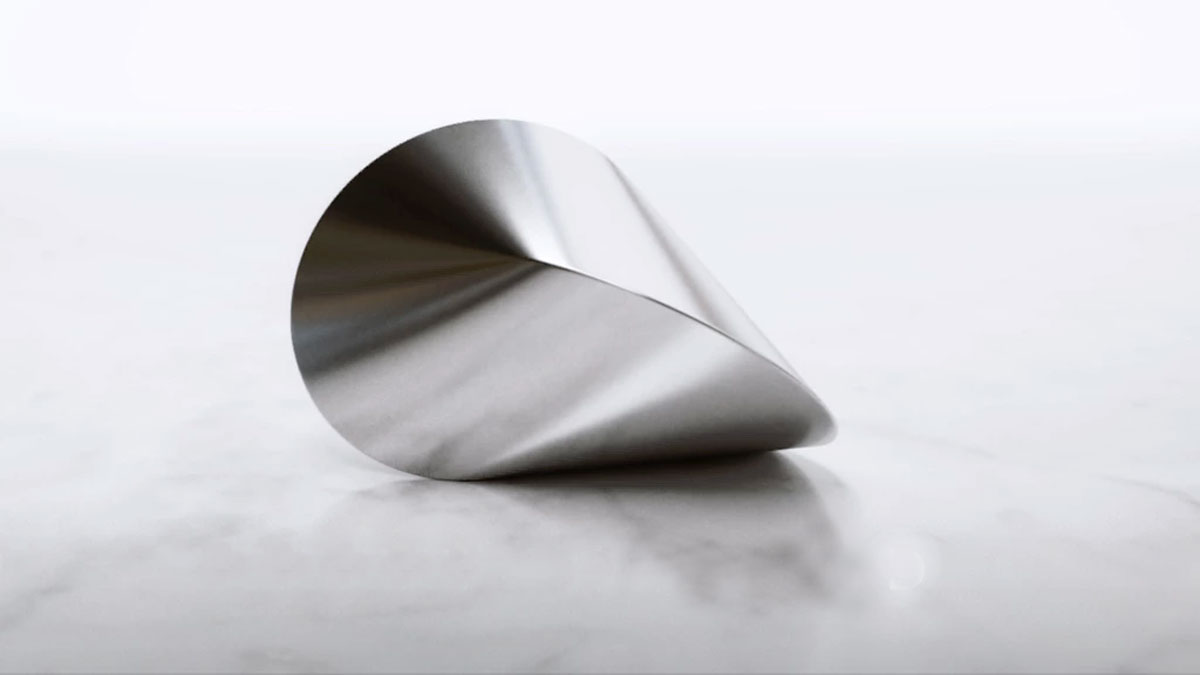 Paul Schatz discovered the oloid in 1929. Yes, discovered. It's not just some rando geometric shape or ergonomically designed fidget toy. The oloid is a real piece of the mathematics puzzle, and Patrick Schneider's OLOID sculpture brings its perfect mathematical properties - and eye-catching aesthetic - to your desktop.

A single piece of solid metal, the OLOID has a curved, but not round, shape with several edges. It looks kind of like a ball of Thinking Putty I just half-squeezed in my hand (with palm lines and fingerprints removed to protect my identity.) But despite its seemingly arbitrary design, the OLOID has been precisely molded to behave in several predictable, and mesmerizing, ways.

First, despite its squashed curves, the OLOID rolls, and it does so in a perfectly straight line. With a motion that is smooth and gentle, rather than the awkward and clunky you might expect. While moving, every single point of the OLOID's surface touches the surface it's on too. And its surface area is identical to a sphere of the same radius. Here's a GIF of the OLOID on the roll.

Have you Paul Schatz your pants yet, math geeks?

If so, pledge for your own OLOID desktop sculpture, made from your choice of liquid, precision-cast stainless steel, brass, or copper, through October 2, 2017. You can also choose from a 4.9-ounce Original or 14.6-ounce Totem sized OLOID.

The ghost of Patrick Swayze not included. Sculpd Pottery Kits are beginner-level boxes of all the (probably very messy) goods you'll need to sculpt, carve, paint, and varnish your own clay masterpieces. ... Or at least...

You can trust me when I say this Mechanical Metal Jellyfish Kinetic Sculpture from MCA Studio is the coolest thing you'll see all week - all month if you're really into kinetic sculptures or jellyfish, all year if you're...

Slow Dance - A Frame that Slows Down Time

Imagine a club in Vegas. A go-go dancer. Strobe lights. It's a spectacle of stop motion animation, the fluidity of movement altered by the way the flashes of light play with your eyes. Now scale that scene way down and...

Colibri the wooden hummingbird is a stunning addition to the world of kinetic sculptures. And DIY. And CNC machining. And gears. I don't really have anything more clever or insightful to say about it, because watching...

Virtual reality may be a rising star, but the ArcelorMittal Orbit is going all-out, balls-to-the-wall IRL this summer with its curving, spiraling, plummeting tunnel slide. Dubbed simply "The Slide," this 584-foot-long...

Need a sick rippled machete that embodies the Aztec goddess of obsidian and Lord of the Night? An Indo-Persian war axe? How about just a good ol' pair of ceremonial scissors? Bladesmith Tom Ward forges some of the most...

Salavat Fidai has seemingly done the impossible with his Pencil Tip Sculptures. Ranging from pop culture icons from Game of Thrones and X-men to busts of Trump and Putin, these pencil tip miniatures are jaw-dropping in...

Guy Laramee redefines the term "bookworm" with his extraordinary sculptural landscapes carved from encyclopedias and other volumes of formidable stature and heft. Mountains, canyons, meadows, Jordanian rock temples, all...