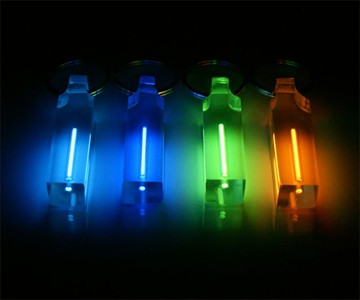 Two things. One maybe you already know, one probably you don't. 1) Tritium is a radioactive isotope of hydrogen, and its natural occurrence on earth is extremely rare. However, the dopeness that is humankind can produce tritium in nuclear reactors. 2) The guy who fabricates the ocular feasts that are these tritium keychains goes by the name of iknitsteel. I. Knit. Steel. Can someone give him a prize for coming up with a moniker that is not only thoroughly representative of what he does, but also 1,000 times cooler than 98% of all contemporary rock band and baby names? Imagine Dragons? Addison? Come on.

iknitsteel hand makes all of his keychains, sanding and buffing them to a clear shine to enhance their 23mm tritium vile inner cores. Single colors in the full Roy G Biv spectrum sell for $30, though some may take longer to ship than others, depending on whether or not their maestro currently has the hue in stock. For $75, up the keychain cool factor to a multi-colored block, which contains all 7 glowing permutations of hydrogen.

Tritium keychains' custom nature means that no two are exactly alike, and shapes may not be absolutely perfect. Their exterior shell, though, is guaranteed to be hard and durable--the tritium vial will not break due to normal use. It might break if your ex-girlfriend smashes it with a hammer, along with your flat screen TV and collector's edition album of Kenny Rogers' The Gambler.

Ordering a tritium keychain seems slightly toilsome, as interested parties apparently must first join CPF MarketPlace, and then email iknitsteel with a request for a PayPal address for payment submission. It's almost as many steps as in the olden days when we had to leave our house to buy something. But perhaps worth it, as the keychains' effect is admittedly pretty dazzling.

If anyone else is interested in earning the untouchable product suggestion street cred Manny has, send your ideas our way too via Dude Product Tips.

December 2013 Update: Sadly, we received notice that iknitsteel announced on his Twitter account that he no longer makes the tritium keychains because his tritium dealer got clean and off the streets. Or for whatever reason, he can no longer acquire tritium.

Ambient Glow Technology's Glow Stones combine with concrete--they either mix in freestyle or nestle in methodically--to create everything from illuminated pathways to Fairyland to sculpted lawn ornaments to mood-setting...

Not only is aerogel the world's lightest solid with a composition of 99.8% air (carbon dioxide) and 0.2% silica gel, and not only does it have sick nicknames, such as "frozen smoke" and "blue smoke", but it also has the...

I'd call the Tungsten Sphere a desktop toy, but given its high density--at just about 2" in diameter the sphere weighs over 3 pounds--I'm not sure how much fiddling or stress-relieving palm rolls you'll be able to do...

Wait, wait, let me just juice a squeeze of lemon...with a uranium twist for that cocktail. No? What, you prefer lime?...

OK, this is like the Goldilocks & the Three Bears of tritium keychains. The first set we featured was by far the coolest and most coveted, but also the hardest to acquire. Many readers deemed the task impossible. Then...

Tiny, mighty, lasts all night, and whether upside down or underwater, is always ready to go. And that's just the tip - the silver tip - of the ForeverPen, a new super tiny inkless pen from World's Tiniest...