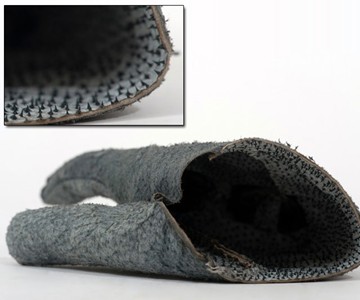 Thorns In meaning #1: Ten thousand mic-rose thorns lining the inside of this shark skin glove. Thorns In meaning #2: Ten thousand mic-rose thorns gouging fish-hook style into the hand of its wearer, such that pulling the glove back off also means pulling a layer or two of skin off with it. The piece is recommended for philosophically-charged art and oddity collectors, the S&M crowd, and individuals whose intelligence is inversely proportional to their bank accounts.

Set the Thorns In Glove on an online marketplace shelf right next to Sh*t Gold Pills. Both items have expressed functions, and both presumably perform those functions as stated, but despite their fascinating novelty, uh, raise your hand if you want to be the sucker who tries out a piece of merchandise whose defining characteristics are: pricey; potentially dangerous; and limited to a single use. Because as far as I know, one can ingest and shit out the same $425 24K gold capsules only once, and unless the wearer Michael Jacksons it forever, the Thorns In Glove is either getting cut off and destroyed, or saturated with blood and tissue during removal.

Icelandic design firm Sruli Recht conceived and fabricated the thorn-lined glove with an exterior consisting of laser-cut Icelandic basking shark skin fused partly by hand-held needle, and partly by a Pfaff 1445, which I'm pretty sure is some sort of electric eel. Sruli Recht caps its Glove of Pain and Asset Misappropriation with the words, Lethal lethal, my right fist and its sequels. I don't really know what that means in this context, but it sounds frikkin' cool, and is definitely what I'm going to say instead of Thank you when I leave the checkout at the grocery store from now on.

Apparently, Iceland is a Mecca for thoughtfully bizarre art. Its natives are also responsible for Grass Knuckles and Skinned Cod Fish Lights.

Nothing communicates strength and confidence better than a firm handshake. Except, perhaps, a weak handshake administered by a hand wearing one of these stun gun gloves. Holy BZZZZZZT! Batman! I thought I'd seen my #1...

As if riding a motorcycle while protecting your skin from flaying off and bones from splitting in half weren't cool enough, Knox is going to make it look like you have mech hands in the process. More armor than gloves...

Men, what can you do with Freetoo's outdoor gloves? An Amazon reviewer says, "I threw several heavy punches at a tree in my yard. And no it didn't feel good on my hand but it didn't damage it at all. If you punch someone...

My immediate impression is that applying BlueMagic Invisible Glove to my hands would feel like covering them in a thin layer of Elmer's Glue. That thought gives me the willies and makes me want to vomit. Maybe the Invisible...

It's hard to tell if there's a working prototype of the Nuada glove out there, of if the hand strength enhancement system exists only as a concept with renderings. The video, which would be a terrific place to demonstrate...

The TurnPoint Glove is a navigation wearable for motorcycle riders. It makes following GPS maps and directions easier (and safer) because you don't have to find a nonexistent windshield, dash, or air vent on your bike...

"Life's a bitch...now so am I!" From the wrist down, anyway, for those looking to channel their inner Catwoman in a pair of Vixy Den's Claw Gloves. Stalking around town as a DC antiheroine is just the tip of the talon...

Of course I don't need a mitten-koozie hybrid so that I may drink chilled alcoholic beverages in freezing temperatures, one right after another like the gluttonous, midwestern lush that I am, without rendering my delicate...

Gloves with finger pads for smartphone touch screens have officially been around long enough for this hi-Call glove handset to debut and just annihilate them on the awesome meter. Powered by Bluetooth, the left glove...

One way or another, the Atomic Beam Glove will prove to be the handiest flashlight you own. In addition to hands-free operation and focused light on projects, repairs, and during emergencies, the glove looks pretty slick...

Schmitz Mittz calls their gloves "hard hats for your hands." These Super Duty versions of their UtilityArmor Waterproof line add abrasion-resistant Kevlar fourchettes* as reinforcement between the fingers (the standard...