His & Hers Star Wars Rings 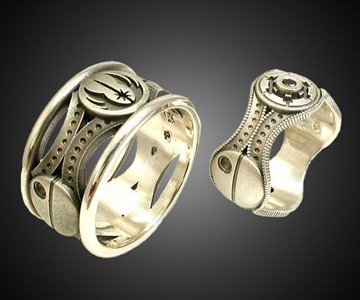 I like the idea of the Force being with me, but I also like the idea of stuff. With one of these Star Wars rings I will still be able to envision and harness the power of an intangible Force, but, more importantly, I'll be able rub for good luck a dope manifestation of it while doing so. A sterling silver manifestation custom made to my specifications no less.

Oh yeah, and my ring comes as part of a his & hers set, which means that pretty soon not only am I going to have a classy Death Star emblem wrapped around my finger, but a lovely lady as well. Because what better way to lure 'em in than a dainty, yet sick, piece of jewelry paying homage to the best tale in cinematic history? Maybe even history in general. Am I right, men, or am I right?

His & hers Star Wars ring sets come with the buyer's choice of Galactic Republic symbols, including:

For additional fees, different metals, such as 14K white/yellow/rose/green gold ($1,050 each), 14K Palladium white gold ($1,250 each), and Platinum ($3,000 apiece) are also available for ring forging. Ringmaster Chelsea Swank can also add stones to the finger adornments for $75 apiece, or sell single rings to people who know better than to commit to a significant other.

My wife, She-Ra: Princess of Power, would break a Lampjoy Glass Ring within 5 minutes of putting it on. No offense, sugar britches, but you are the be-all, end-all of hand talkers, and at least one of those enthusiastic...

Question for Beyonce: if you like it, is it OK to just put a Ring Mug on it? Yeah...I didn't think so...

Welp, it's better than having a viper around your neck. This Viper Ring turns the Mangshan pit viper into a beautiful, formidable piece of jewelry. Its head sits atop your finger, while its body, er, snakes around either...

Jeff McWhinney designs wedding rings for men who move. Like a little more than from their desk to the john, the car to the house, and the couch to the fridge. Hikers, golfers, climbers, weight lifters, even really intense...

Sure, this Strong Man Ring Holder is super ripped and all, but I bet the dude's a total acne-ridden, cross-eyed, butter face. Ugly as sin, and that's why they never show him from the front in any of the ring holder's...