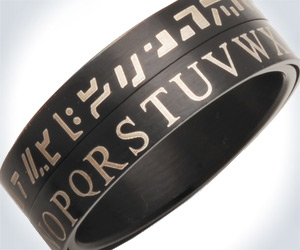 Communication, so the saying goes, is key. How appropriate then for the bilinguists of the Galactic Republic to provide us with this Translator Ring, a finger-sized key to communicating with the Huttese. Imagine how Jabba would soften towards you if only you could tell him a joke in his native tongue. Tubby alien gangsters love jokes. Jokes and quotes from The Princess Bride. (Because fictional antagonists from outer space are really no different than you and me.) The ring allows wearers both to write and translate the language of the Hutts, which should be terrific news for students who thrive on passing covert messages during class, as intercepted transmissions and confiscated media will be indecipherable to others. This would have come in handy for Tom Paulson in my 10th grade trig class, who resorted to chewing up and swallowing a note he received when the alternative was turning it over to Ms. Lindbergh, who was most likely the distasteful topic of the communication.

Now here's something that should be illegal, but is instead available with free shipping on Amazon. The reverse peephole viewer, used appropriately by law enforcement personnel and inappropriately by 99% of all others...

Jeff McWhinney designs wedding rings for men who move. Like a little more than from their desk to the john, the car to the house, and the couch to the fridge. Hikers, golfers, climbers, weight lifters, even really intense...

The Killer Key is for law enforcement officials, landlords with squatters or evicted tenants, and pranksters who thrive on taking things one step too far. See, the key blade inserts into any Kwikset or Schlage brand lock...

The Bond Next Door: Top 11 Tools for the Everyday Spy

RC surveillance mosquitos and robotic hummingbirds as security cameras may not be perfect tech yet, but they're on the rise and constantly improving, with some available to commercial markets for testing. And even looking...

The Assassin's is a trick teapot! And not a very fun trick if you're on the receiving end. The Chinese creation contains 2 separate interior compartments, one of which was historically meant for tea, and the other of...