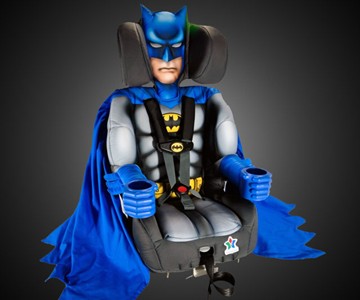 A Batman Car Seat?! Kids these days are so spoiled. When I was of car seat age my mama didn't even put me in a car seat. She strapped me down with bungee cords. And only on the inside of the car instead of the roof on days we had tornado warnings in effect. Now all these little punks get to lounge comfortably in the lap of Batman and even share in the magnificence of his cape. As someone who cannot abstain from calling BS when he sees BS, all I've got to say is: that is some buuuull shit*.

Also, why doesn't the Batman Car Seat come in adult-sized? To go with my Batman Helmet?

I'm pretty sure the car seat has passed all governmental requirements for keeping its contents safe while driving. Check out the KidsEmbrace site for a full rundown of specs and certifications. I can't tell exactly what sizes of children Batman has been designed to hold, but it looks like the ones who weigh between 22 and 100 pounds. How much do you think the mini Guido hamming it up in the above photo weighs? Yeah, I was gonna say a buck twenty-five too. Puh. I bet when he gets up Batman will have pins and needles in his legs for days.

Maybe my favorite part about the Batman Car Seat listing on KidsEmbrace is the company's full-disclosure, 500-word description of who Batman is and why he is famous. They also clear up that he is a comic book character created by Bob Kane and Bill Finger in 1939, not a real live immortal superhero. Because parents considering purchasing an item intended to secure and protect their children have a right to know.

*Imagine this phrase pronounced in a slight South Carolinian drawl because that is how my friend Victor says it and I swear the effect is magnified x10.

Ha! It's A DIY clown car! Except the P.50 isn't clowning around. Builders of car kit, available in electric and gas models, will find themselves the proud owners of fully functional examples of the World's Smallest Car...

If you thought the TRON Lightcycle was awesome (and expensive) prepare your senses for overload as they take in this Batmobile replica. It's street registered in the US, so if you dream of trying your hand at Batman-style...

Evolution of the Bat-Signal Poster

Geez, 30 permutations of Batman's Bat-Signal from 1940 to 2012. I wish the stale logos of Ford and Chevrolet would take a page out of the progressive DC Comics' book. Maybe then I'd consider buying an American car as...

Black Milk Clothing's Batman Collection has a Batsuit for every type of crime a girl could want to fight. For example, not looking hot. Or not showing enough leg. Not showing enough cleavage. Not wearing a belted Bat-Signal...

Just to calm your immediate concerns, yes, the forthcoming Elio will be available in colors other than Ghostbusters Slimer. An American-made, China-priced 3-wheeler, Elio heralds itself as a next-generation personal transporter...

I guess since the Dark Knight Rises motorcycle suit pretty much congeals itself to the body of whomever puts it on with nary a pocket to spare, UD Replicas figured they better come out with some sort of supplemental storage...