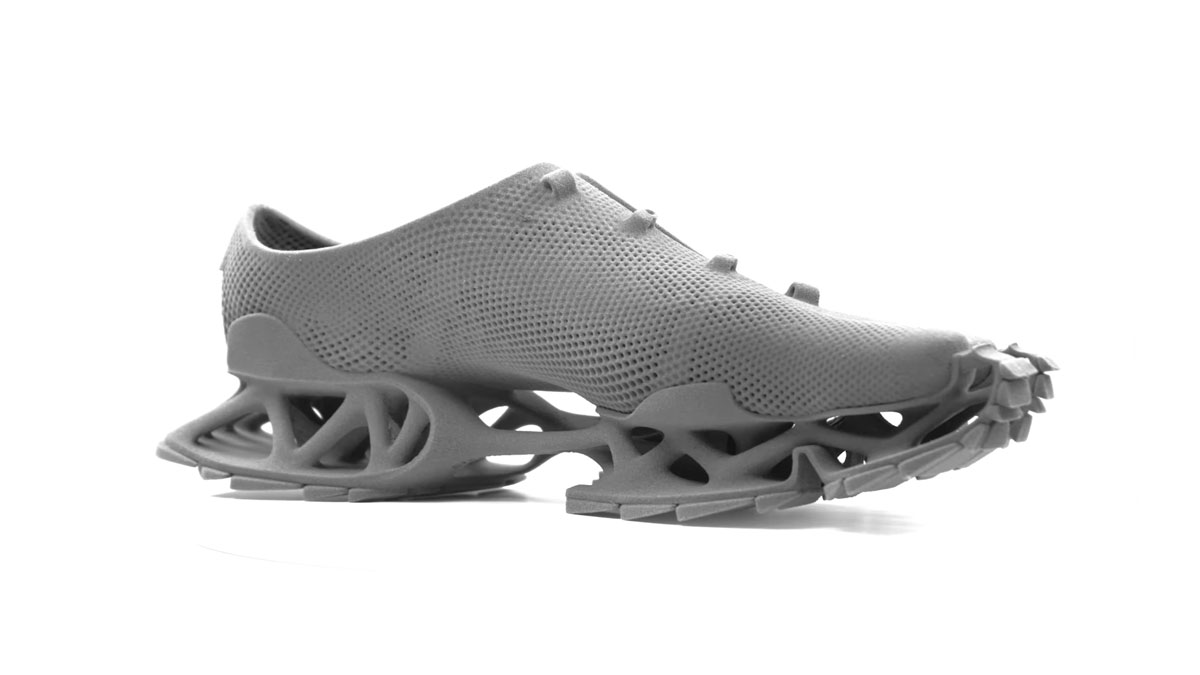 As bizarre as The Cryptide is in appearance, the sneaker is deliberately so. Sintratec explains the "creature-like footwear" was inspired by cryptids (not the crypto tide), or the group of mythical beasts some people believe in, but whose existence has never been proven. Bigfoot. Chupacabra. The Loch Ness Monster.

Designed especially for laser sintering on the Sintratec S2 System, The Cryptide sneaker is made of flexible TPE elastomer material. Its chunky, formidable sole has an open design that reminds me of Substance Jewelry's Dune Rings, and pointedly contrasts with the shoe's barely-there mesh upper that's "not much more than a sock."

Henrich intends The Cryptide to wear comfortably and with precise ergonomics, but, more importantly, to allow wearers to leave giant footprints wherever they go like a cryptid would do.

The Hypelev sneaker stand enables anyone - even you - to defy gravity with a pair of Air Jordans just like Michael. The only catch: you can't be wearing them...

Coming June 2022 to a Swoosh store near you: Nike ISPA Links. Fly modular sneakers with 3 interlocking pieces that connect without glue. And when I say "fly," I don't mean fly-ass. I mean fly-eye. As in, what the soles...

Sneaker in the front, party in the back! The Mullet Shoe is a high-top with a striking, and silky smooth, set of light brown locks cascading down the back of its upper. It's a mullet...for a shoe...ready to swish all...

Meet Nike No-Hands! Nike's GO FlyEase slip-ons reflect the company's first attempt to design shoes that keep your hands entirely out of the foot equation. Sliding the laceless kicks on - and off - is a 100% hands-free...

Look, Ma! One hand! The QuickShoeLace one-handed lacing system brings convenience to adults, and an alternative to Velcro straps that will inevitably get gunked up with dust and food and boogers to kids who can't tie...

If, when a pair of socks slipped inside a pair of sneakers, they made a baby, that baby could definitely pop out looking like Slow Man's Slip-On Sock Shoes. And while I'm not so sure about the laceless Sock Shoes' zdesire...

Kick it with LEGO and Adidas this summer, courtesy of the brands' collaboration on this LEGO Adidas Originals Superstar Sneaker. At 731-pieces the shoe, like the LEGO Typewriter, is another adult building brick kit intended...

By: The Mandem Safe »

Swoosh your stash so sticky fingers won't swipe it. Except...bummer. The Mandem Safe, a keyed crypt for your valuables that looks like a Nike shoebox, is still just a prototype. So even harder to get right now than a...

I don't know if Speedland's SL:PDX trail running shoes will up your trail running game, but the Portland brand's high-performance, modifiable footwear will certainly up your mint green fashion game...

Nike is a little early for April Fool's Day, but I guess they wanted to get the Air Max 1 Golf "Grass" word out soon into the 2019 PGA Tour, and build some hype for the sneakers. Which, as far as I can tell, are real...