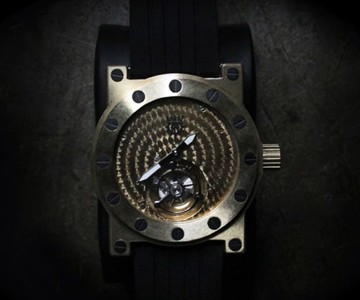 Do you know what a tourbillon is? Besides Refined Hardware's ploy to get me to pay nearly $3,000 for their latest edition of watches? By definition a tourbillon is "a frame for the escapement of a timepiece, especially a watch, geared to the going train in such a way as to rotate the escapement about once a minute in order to minimize positional error." Its cantilevered design also somehow renders it impervious to the effects of gravity. I hope that means it won't feel heavy on my wrist. More likely, it means that it will keep better time.

Refined Hardware's other ploy to get me to play nearly $3,000 for a piece from their Project 2 line is naming one of the watch models Gatsby after literature's largest and most tragic badass. The Great Gatsby is one of the best books ever written by someone who is now dead and Leonardo DiCaprio better not F up the title role in the movie, which I'm very concerned that he does seeing as they're releasing it in April and not November/December when all of the films production companies don't think suck usually come out. The wrist version of Gatsby has a manual wind flying tourbillon in a 316l stainless steel case paired with a choice of a steel mesh or black American alligator strap.

Two other Project 2 models, the McQueen and the Rearden, alter the watch's aesthetics with a black PVD finished case coated in steel and black ion plated grade 5 titanium; and an untreated pure bronze case fitted with a 35 mm sapphire crystal respectively.

All three watches are made to order, and limited to 33 pieces each.

You gotta have some balls to call your watch an "horological machine" and charge over $200 grand for it. And MB&F's HM6 Space Pirate is definitely a watch with balls. Five of them, to be exact. The timepiece's transparent...