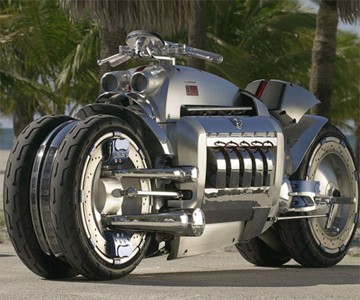 Technically, Dodge debuted its Tomahawk, a motorcycle with 4 wheels, a Dodge Viper engine, and top speed capabilities of 420 mph, a decade ago at the 2003 North American International Auto Show in Detroit. Really though, with its concept-only status, denial of street legal classification, and inability (or unwillingness) to demonstrate speeds above 100 mph, it's more like they debuted it in their dreams. And now, for the bargain price of half a million dollars, you and I can have one of these unofficial dream machines--seemingly one of only 9 produced--for our own! Note, however, that Dodge would like us to designate the Tomahawks "rolling sculptures" and promise not to ride them.

If my friend Cornelius and I got our hands on a 4-wheeled motorcycle with a 500 hp, 8.3-litre, V10 SRT10 engine, I don't care if there was a 72% chance it would spontaneously combust or mutate us into giant perambulating replicas of Madonna's crotch, there's no way on this deteriorating, polluted, globally warmed green earth that we wouldn't head straight to the desert, hop on, and STIR SOME SHIT UP.

Is this a real problem? Or rather, is it such a big deal? People using your driveway as a turnaround. Cars getting lost or going one street too far and pulling into 20' of your pavement to correct their mistake. Since...

I know most of you have heard of a radar detector*. Possibly you've used one before. Maybe you've even tried the original Fuzzbuster. But whether or not you're aware of how life (and wallet and license points) saving...