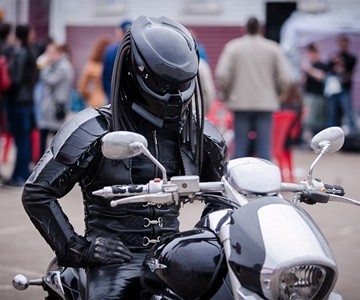 When Batman got a helmet it made Predator all jealous so he whined to NLO Moto, "WTF man? First he gets the higher budget movies and legitimate actors and then DC rejects my idea for a The Dark Knight v. Predator crossover film and now he gets a full line of motorcycle gear in his image too? Throw me a bone, dude!...and if you don't, I am going to pulverize all of yours." So here we have a Predator motorcycle helmet. But it's not DOT-approved* and is intended only as a novelty, so I guess it's more like a Predator hat. Batman wins again.

Predator helmets are based on certified IXS pieces and made of fiberglass, carbon fiber, and polycarbonate. In addition to the basic helmet version featured, NLO Moto offers a bevy of upgrade and add-on options to personalize your beast, including airbrushing, carbon dreadlock spearheads, and canines.

Suggested via Dude Product Tips by David S. Thanks, David.

*September 2013 Update: The immense fanfare surrounding NLO Moto's release of their Predator motorcycle helmet apparently prompted the Russian company to develop a new model suitable for actual motorcycle riding (see featured photo above.) Now they also have versions 3.0 and 4.0 that are DOT and ECE 22.05 certified, have a 50% increase in field of vision, and "can be easily used on the roads of Earth planet."

December 2013 Update: A video from an unsatisfied NLO Moto customer has recently surfaced here, which we would recommend checking out and taking into consideration prior to proceeding with a Predator Helmet purchase. While Dude endorses neither the quality of the helmet, nor the validity or authority of the video, we do support transparency in commerce, and educated buying decisions. Thanks to the Dude readers who contacted us, and shared the video link.

This Alien Statue from Area 51 is pretty much life-size (I mean, aliens seem pretty short, right) at 5 feet tall, and glows outer-space-radioactive green in the dark, so it's obviously a choice pick for anyone getting...

Call this Alien Butler Roswell, because everyone has heard of Roswell, and no one has heard of his (her? their? its?) real name, Keilleilleillopeenope. Or, I don't know, maybe the little alien's language doesn't even...

You need a hug? I'd be careful what you wish for. ... Unless you're one of my arch nemeses, such as my ex-girlfriend Karen or my Aunt Jan, in which case, free hugs all around, courtesy of this Free Hugs Xenomorph Decal...

Oh what I would give to wear this Alien Mind Control mask to work. I'd just ride the lobby elevator up and down all day long, standing there ominously to greet, and soil the pants of, everyone who gets on. I'm almost...

What's scarier than this freak parade of masks on Halloween night? The head-splitting, toilet-hugging hangover we're all going to have Sunday morning. Especially with 1) Daylight Saving Time ending at 2 a.m., giving everyone...

By: Design You Trust »

Alien prequel Prometheus doesn't hit theaters until June 1, 2012. So in the interim, let's take a trip down memory lane to the series' Alien vs. Predator installment. Are you there? OK, now throw in a motorcycle, a grip...

It is a sad day in Whoville when Cindy-Lou has to put a NightCap Scrunchie over her cocktail to prevent some who-hole from dropping roofies in it. But these are the times we live in, and if an 80s-era hair tie tethered...

You've got 10 days to get to Sweden if you want to watch The X-Files 2016 premiere in this UFO Cabin. You might want to bring a flatscreen and a satellite too, since this Treehotel accommodation is all about disconnecting...