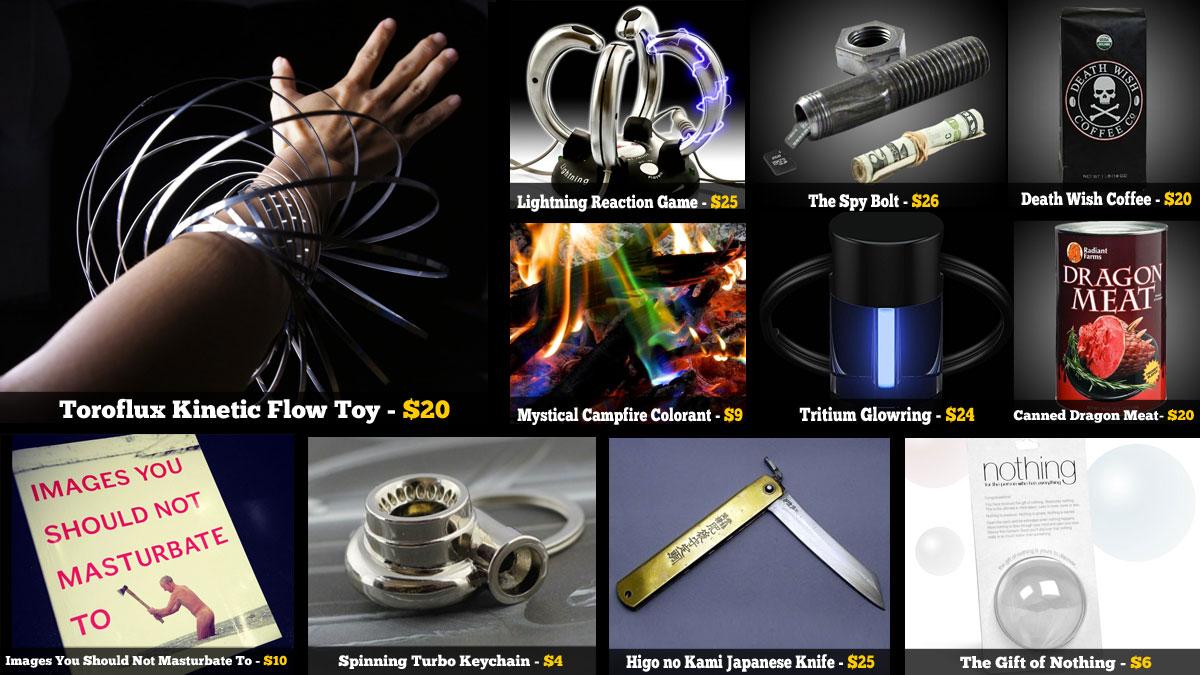 Happy Black Hole Friday! Yes, that's right. Take a deep breath. Pull out the credit card. And brace yourself as all of your year's hard-earned wages are sucked into the soulless abyss of Target/Wal-Mart/Best Buy dark matter. Orrrr step back from the event horizon and refocus your attention--and just a fraction of your 2014 income--right here. We've put together a list of sweet holiday gifts that will score big with family, friends, and co-workers but, at $30 or less, won't break the bank. Even better, they're all available for purchase directly from your couch so you won't have to risk getting trampled or beaten over the head with an old lady's walker or absorbed into eternal nothingness to buy them. (Note: All items' prices are listed as they were at printing. Prices are subject to change.)

Toroflux Kinetic Flow Toy ($15). A tactile, interactive spring toy that could spawn a tactile, interactive spring toy addiction. In addition to bouncing effortlessly from a set of flat stacked rings to a lolling 3D wonder of geometry, the Toroflux can ripple up and down its holder's arms, flow seamlessly from arm to arm, or dance along a tightrope better than a bear in a tutu on a two-wheeler. The effect, described by maker Flow Toys as "a metallic soap bubble", is almost as mesmerizing too.

Higo no Kami Knife ($24). Traditional Japanese non-locking folding blades handmade and imported directly from Japan. And if you don't believe me, believe the superb English translation of their product description: "Attention: Higo no Kami has scratch little bet from the beginning. because all handmade and old meiser made. If you are very sensitive and have not knowledge value, Please choose factory made."

TV-B-Gone Kit ($17.50). A handheld device whose single button fires out 230 different turn-off codes capable of powering down nearly every TV in existence. This Adafruit DIY kit makes the payoff even sweeter because users get to solder and assemble the circuitry themselves.

Paper Log Maker ($15). For anyone who wants to look like less of a redneck burning their trash. The deep metal box accepts newspapers, junk mail, cardboard, wood chips, and wrapping paper, but probably not Taco Bell bags because the grease on that shit could start a forest fire or burn down the neighborhood. Once contents have been added a pair of compression handles secured above the box smash them all down into densely compacted, fire-ready bricks that burn clean and emit minimal smoke.

The Spy Bolt ($24). Made from real 3/4" and 1" machine bolts, Spy Bolts are a take on the old KGB "dead drop" hollow bolt the Soviets used during the Cold War. They have an O-ring seal to block moisture and water infiltration, plus reverse threading on the head for additional security.

Mystical Fire Campfire Colorant ($9). Mystical Fire packets turn all wood-burning fires (the ones in your living room included) into a circus of colorful flames.

1 Gallon Stainless Steel Flask ($25). Brushed finish. Elegant, cylindrical curves angling into a screw-down cap almost half the width of my entire mouth. Ooh, it even comes in a gift box.

Self-Destructing Spy Paper ($11 - $14). Amazon reviewer Carlos delivers a Spy Paper word of caution: "I bought this product to write secret spy messages and have them disappear in water afterwards but ended up spilling my drink on it and the whole notepad disappeared, not cool." Still, he concedes, "But this paper is pretty cool."

How to Poo at Work ($12). The #1 guide for handling the onslaught of a #2 in the presence of co-workers, bosses, and the plumber who's in the bathroom all day today fixing the leak in the bathroom ceiling.

Movies R Fun - Iconic Scenes as Children's Art ($2). Josh Cooley's book takes iconic and cult (mostly) R-rated movie scenes as inspiration for artwork styled after children's storybooks. He parodies the most bone-chilling or chest-beating or sexy clips from contemporary classics ranging from Alien to Apocalypse Now to The Shining.

Christmas Condoms ($4). Go on, be a Ho, Ho, Ho this year. Just be safe and don't spawn any Wah, Wah, Wahs while doing it. To make things easier these condoms are packed with latex protection on the inside and witty sexual innuendo on the outside.

Ironing Man Ironing Board Cover ($15). The best Secret Santa gift for the biggest slob in your office. This cover includes step-by-step instructions complete with diagrams and "Place collar here"-type demarcations for ironing a shirt.

The Gift of Nothing ($6). I have a very special gift for you! Nothing! The Gift of Nothing! Ahhh, it's still funny after all these years. When I was a young and greedy child and my parents gave me the gift of nothing, it came in a fancy, slim rectangular box. I had to lift the lid to find Nothing inside. Nothing, plus a document describing Nothing in detail, delineating its complete lack of uses, yet heralding it as the only thing left to get for someone who has everything.

Bullet Bottle Opener ($10). For anyone who feels that presents and cold ones should be opened simultaneously.

Spinning Turbo - Turbocharger Keychain ($8). When flooded with air--preferably from a straw or the canned/compressed variety, as opposed to direct from the horsepower enthusiast's mouth--the keychain's turbine rotates and sings like an adorable baby turbocharger trying to emulate its daddy.

Corkcicle Chillsner Beer Chiller ($25). After 45 minutes in the freezer, Chillsners insert into and latch onto bottles of brew to maintain optimal ice coldness from swig one to swig final.

Scarface Garden Gnome ($19). Stands 9-1/2" tall, which I'm pretty sure is an accurate representation of Al Pacino's actual height, and includes an etching of Montana's iconic "Say hello to my little friend" quote on its base.

Lightning Reaction Reloaded - A Shocking Game ($25). Cap off Christmas with the fam by sending a defibrillating jolt of electricity through Grandma because she's got the slowest reaction time. This version allows players to adjust the intensity of their electrocution.

Lewd and Obscene Party Game ($30). According to creator Anthony Annese, is what would happen "if Urban Dictionary and Balderdash had a one night stand and the condom broke." [Note: See listing above for replacement condoms.]

Black Playing Cards ($12). Black like my ex's heart, and black like the magic I'm going to use to make her rue the day she left me crushed and dejected inside a four square during recess.

AirForce BlowGun ($25). Fitted with a mock trigger and a live, fat mouthpiece, the AirForce BlowGun can convert your emphatic exhales into a firing power of up to 800 feet per second (muzzle velocity) and distances of over 100 feet. Its designers note that veterans shoot about 1 round per second, and in a field of foam battle, balls-on accurate range is easily 45 to 50 feet.

Dancing Water Speakers ($23). Plug a pair of fountain speakers into any USB-compatible music device, and fire up "Just a Gigolo". The bass will ignite the water inside the plastic canisters, plus 4 multi-colored LEDs, and the lot of them will begin dancing and jamming and rocking to the rhythm of the house.

Death Wish - World's Strongest Coffee ($20). Death Wish was created for...no apparent reason other than to push the boundaries of insanity. At approximately 200% more caffeinated than typical coffee shop roasts, these beans are dark, dirty, and not for the weak.

Breakfast Sandwich Maestro ($24). A tower of non-stick electric griddle components that stacks and seamlessly integrates your favorite morningtime foods into a delectable handheld meal. In addition to E-muffs, the maestro accepts protein bookends in the form of biscuits, small bagels, and bread my mama measured and cut into perfect circles to fit the machine.

Thug Kitchen: Eat Like You Give a F*ck ($15). Over 100 recipes, from bitch-ass soup to motherfucking nuts, fill the full-color pages of this recipe blog parlayed into a profanity-laden cookbook.

Alcohol Shot Gun ($19). Trumping the front seat and rivaling the firearm for everyone's favorite shotgun, the Alcohol Shot Gun loads and explodes an ounce of any liquid poured into its cartridge. Cock the trigger, point, shoot, and BOOM! Magical fruity/puckery/peaty projectile deployed.

Edible Candy Cane Shot Glasses ($10). Get everyone sloppy drunk and belligerent on Jager and Wild Turkey taken from festive shot glasses made of real, edible candy canes. Don't forget to wear a Santa hat and toast the Baby Jesus before each refill!

Fruit Infuser Water Bottle ($17). Fitted with a plastic tube that's vented and removable for filling with the likes of lemons, limes, strawberries, cucumbers, and mint. The Flavor-It makes drinking water a far less unpleasant chore, plus dramatically reduces the risk of inadvertently sucking down a lemon seed.

18 Gifts You Won't See on Every Other Gift Guide