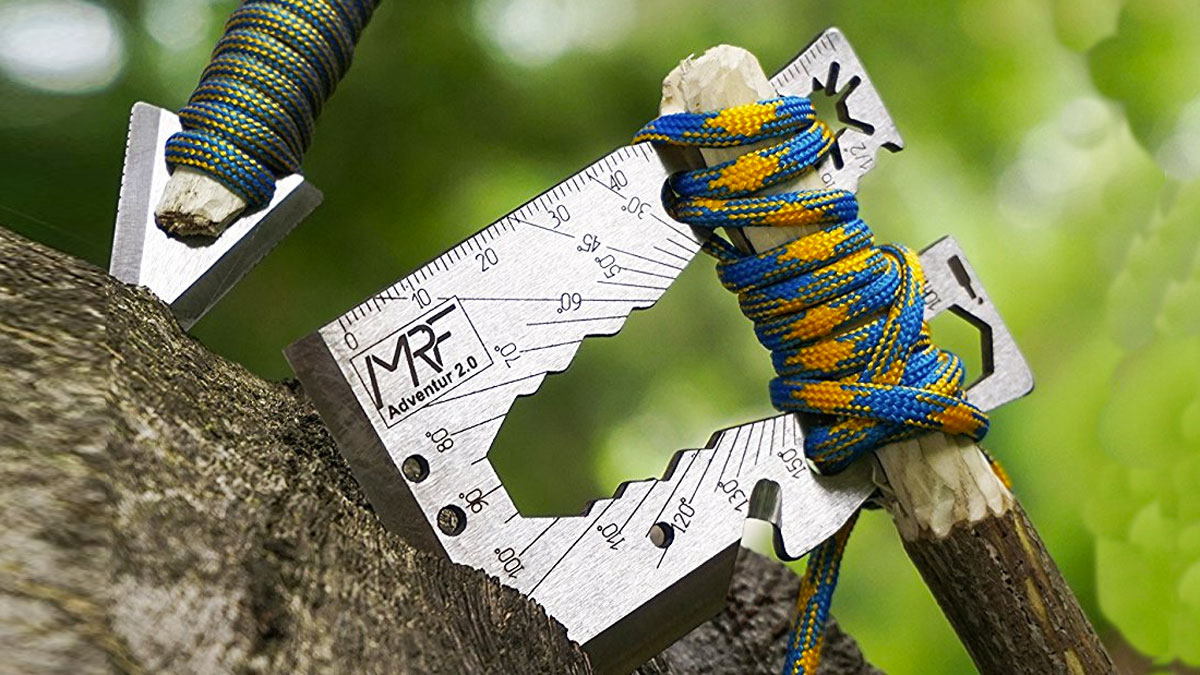 Note: Credit card multi-tool prices are listed as they were at printing. Prices are subject to change.

Wallet Ninja 18-in-1 Credit Card Tool $13. They call it the world's first 100% flat multi-tool. Made from 4x heat-treated steel guaranteed never to rust, bend, or dull.

Titanium Lock Picking Card $25. Not that I'm one to break and enter, but...I could be if I had ITS Tactical's Titanium Entry Card. Made of aircraft grade titanium, the 0.032" thick "emergency" lock pick tool set fits just as easily into wallets as it does into single-pin barriers standing between you and unlimited access to your boss' in-home theater and Prima Cinema watch-brand-new-Hollywood-releases-at-home privileges while he's in St. Bart's.

Credit Card Razor & Mirror $13. This is called a Carzor. And although that name, which sounds like a face groomer for your car's mustache (remember when those were a thing?) instead of your own, detracts from the Carzor's clever concept and execution, it doesn't overshadow them entirely. Slim enough to slip into a wallet, sharp enough to eliminate the 5 o'clock shadow on a Friday night...or Saturday morning...the razor set may be the ultimate urban jungle survival tool. Well, it and the tic threadless button mender.

Cardsharp2 Credit Card Folding Knife $21. The Cardsharp2 from Iain Sinclair Design was originally designed as a last ditch, lightweight surgical knife that's easily disposable. Though its polypropylene body is just 2.2mm thick, and total weight is 13 grams, the card and embedded stainless steel knife maintain enough robustness, strength, and precision to cut through anything from a tennis ball to a tomato.

Ka-Bar Snody Crisis Card $65. The Snody Crisis Card is punched and jagged for a strong grip and maximal impact when you need to defend yourself. And it's finished in a rich anodized blue with gold edge accents for a slick look and flash of intimidation for when you don't. Mike Snody designed the credit card-sized tool for Ka-Bar as both a last-ditch method of protection during an attack, and an everyday assistant for tasks requiring sharp edges. Like box cutting. And removing the cardboard crusts from the whole-grain, high-fiber bread my fiancee insists on using to make my sandwiches.

Mesh Multi-Tool Card & Wallet $70. The titanium Mesh Card from Silo can slide into your wallet, or it can step up and be your wallet. A removable silicone band holds onto cash and cards, while the ultra-light plate itself serves as a smartphone stand, RFID-blocker, and bottle opener.

Readyman Hostage Escape Credit Card $13. This is all of course presuming you get to keep your wallet after you've been taken hostage. And that you can maneuver your cuffed, roped, or zip-tied hands inside it to grab Readyman's credit card of escape tools. Oh, and also poke them out of their holding gates.

The Hostage Escape Credit Card still looks cool though, and might be fun to whip out for conversation or when someone realizes they've lost the handcuff key a little too late. Or just pretends they have in whatever RP activity you're into that's none of my business. The 0.42-ounce stainless steel card includes a: saw; handcuff shim; rake; and tension wrench.

Readyman Wilderness Survival Card $13. From the same Readymen responsible for the Hostage Escape card, this slim plate swaps the tools you'd use to GTFO with those you'd use to survive once you're on the run. That's 3 x arrows, a snare lock / fishing lure, 9 x fish hooks, an awl sewing needle and tweezers, and both course and fine cut saw blades.

SURVCO Credit Card Ax $23. SURVCO, owned and operated by a disabled veteran, adds a few clever pieces to the tactical, survival, and prepper world, but the credit card ax is probably the company's coolest. Both in concept and in execution--check out the video to see how not-just-for-show this multi-tool can be. Made of 304, 12-gauge stainless steel, the snap-out ax has 21 different functions. Like tomahawk. Scraper. Shovel. Saw. Socket. Seatbelt Cutter. Bottle Opener. And obviously ax.

RumbaDock 14-in-1 Credit Card Multi-tool $9. That wrap of paracord is gonna add some bulk to your wallet, but for the price and functionality, it might be worth it. Also one of the nicer looking credit card multis I've seen.

Tool Logic Credit Card Companion $15. SOG's 9-piece multi-tool doesn't just build around a credit card, it builds into it. At 4-1/2mm, it's twice as thick as some of the other listings here, but the ability to pull out and remove a blade, tweezers, toothpick, and bottle opener from the card, rather than spinning and maneuvering the whole thing, makes using these tools less awkward.

MRF 30-in-1 Survival Hatchet Tool Card $38. MRF packs a ton into their tiny, flat package here. Survivalists, preppers, hunters, backpackers, and hikers / campers will all find a use for at least one of the Survival Hatchets 30 tools. Even if it's just popping out the center arrowhead and attaching the rest of the card to a stick to spear brownie bites and chop sausages.

PocketMonkey Multi-tool $18. The PocketMonkey might be the OG credit card multi-tool - or at least one of the originals. It still stands out as one of the best due to its 9 built-in implements, 1mm thickness, 0.6-ounce weight, TSA-compliance, and the fact it looks like a monkey. Hoohoohoohoohaaahaaahaaa!

Leatherman's new baby Tread, a multi-tool worn on the wrist, is so brand new it hasn't quite popped out of the oven yet. But before you start leaving interminably clever, "This site should be called Dude You Can't Have...

Bomber & Company invites you to upgrade - or perhaps, upblade - your everyday carry with their B-2 Nano Blade. They say, at less than 1 ounce, the pint-sized pocket knife is the world's lightest fully locking nano blade...

Uh, I know it's called an Omniblade, but I still wonder if it's wise to hold this apocalypse-ready machete multi-tool from omni ends. For example, it seems like the Omniblade grip the dude in the photo has chosen is just...

People around here seem to love knives and multi-tools. Multi-tools in particular are, like, the new bacon. Before, for at least a year, when I posted anything about bacon clicking fingers went hog wild (see: tactical...

It's a little smaller than your average bat'leth, but this ode to Klingon weaponry still serves its purpose as a 6-in-1 EDC multi-tool...

ACLIM8's COMBAR FoldaXe Pro is a Red Dot Award-winning adventurer's multi-tool that integrates the company's FoldaXe base with the knife and saw from their Pro Kit. Beautiful and compact, this new COMBAR is built to help...