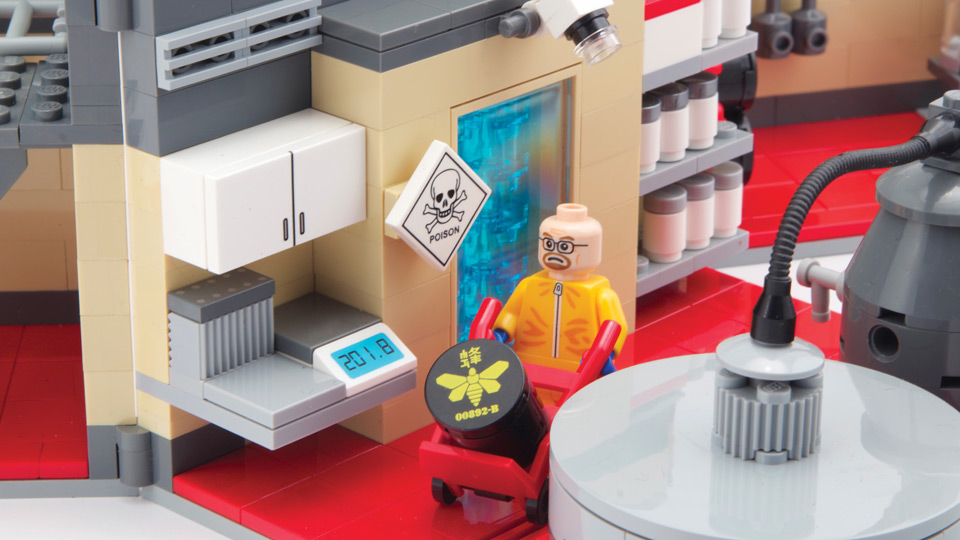 Sold Out from Citizen Brick »
Check It Out

Would LEGO ever produce and release a Breaking Bad Meth Lab? Probably not even if its CEO and Board of Directors were all required to inadvertently step on an errant brick once an hour, every hour of the day, every day for the rest of their lives. Would a company specializing in LEGO-esque bricks and sets ever seek to capitalize on the family-friendly magnate's PG prudeness, and produce and release a LEGO knockoff Breaking Bad Meth Lab? This is America, so...say it with me...fuck yeah!

On TV, the beginning of the end has arrived for everyone's favorite chem-teacher-turned-druglord, but that doesn't mean that Walter White need leave your living room forever as Season 5 concludes. Citizen Brick's Superlab Playset includes minifigs modeled after the great Heisenberg, plus his Tonto Jesse Pinkman and tasty fried chicken/tasty hard drug baron Gus Fring, ready to get cooking in a spectacular kitchen o' meth. Over 500 pieces of lab mainstays and details include vats, lockers, storage containers, scales, signage, and a security camera.

You can't always get what you want, but if you try sometimes...and wait 'til August 1st...you can get LEGO Art's Rolling Stones Tongue & Lips Logo set. Joining the likes of The Beatles, Star Wars Siths, Marilyn Monroe...

Worn, signed, and sweated upon by Bryan Cranston himself. Also mingled in: the DNA of Jimmy Fallon and Common, whom the Breaking Bad star let take a turn in this Landon Meier Hyperflesh Walter White mask at Comic-Con...

Of course EverBlock can't say it out loud, but one look at these big ol' building blocks, and it's obvious what they are: life-size LEGOs! I first wrote about EverBlocks in 2015, but with the pandemic and WFH requirements...

You just spent nine...hundred hours putting that master-level LEGO set together, so Wicked Brick figures one of their display cases might be in order to protect and show it off...