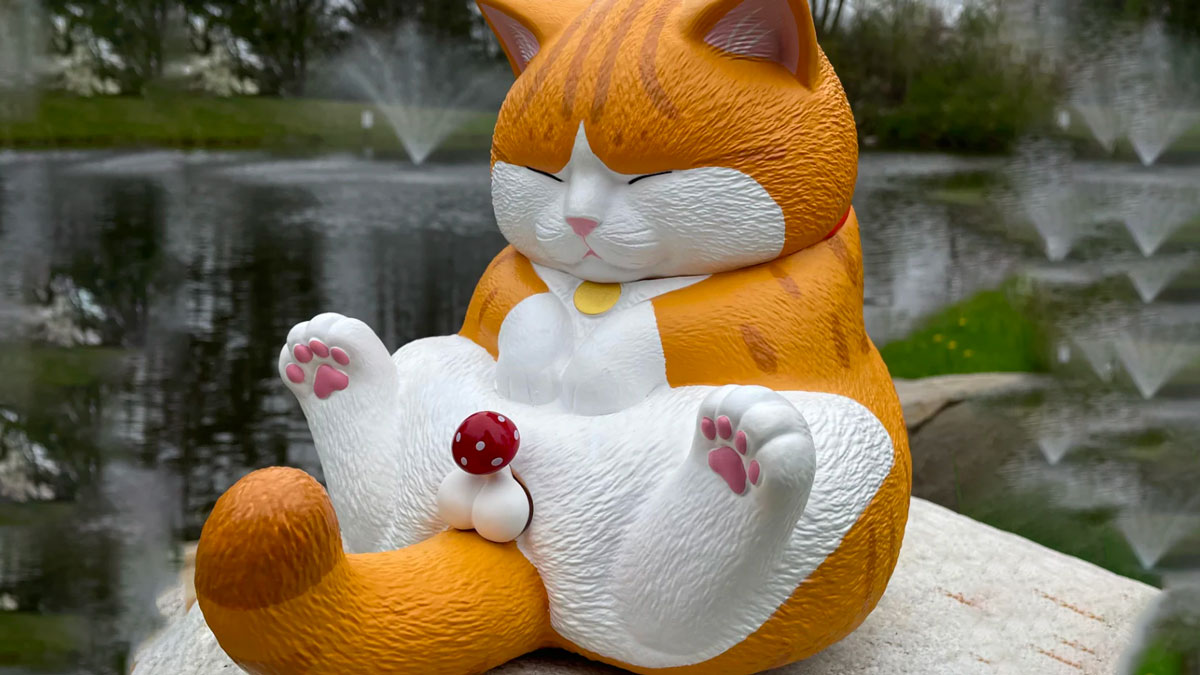 $70
from Tenacious Toys »
Check It Out

Not that a toy has to be believable but...think of the elevated creative possibilities of an orange tabby licking his crotch. The Crotch Staring Cat comes with interchangeable testicle, mushroom, flower, and lipstick crotches. Cute. But a Crotch Licking Cat could include testicle, ice cream cone, lollipop, and George Costanza wedding invitation envelope crotches!

Despite this missed opportunity, QianLi Ma's Crotch Staring Cat with swappable crotch parts is still pretty weird and fantastic. A great gift for your girlfriend who loves cats. Or, I suppose, crotches.

Did you know crotch wigs have an official name besides "crotch wigs?" According to crotch wig maker The Original Pussycat Patch, they're called "merkins." Merkins! It sounds like a new breed of little creatures created...

Not much to add to these boxer briefs. Oh, except for a picture of your girl - girlfriend, wife, crush, black-hearted ex Karen - strategically placed at the crotchal region so as to look like she's hugging your cock &...

It tastes like dark chocolate and it's latex-compatible, ladies and gentlemen. Lollipop Wipes are individually wrapped pieces of black rayon paper infused with an edible - and dark-chocolate-flavored! - water-based cream...

One of the 3 wolves howling at the moon on my T-shirt decided to break from the pack, and lookee where he ended up. I think this positioning works out better for both of us. He gets some privacy, and I get an accurate...

Wife or girlfriend wishing for a kitty under the Christmas tree this year? Welp, get her a Christmas Tree Kitty Carpet and you'll basically be giving her exactly what she asked for. While saving yourself the allergic...

You've got your Asswipes to keep your backside in check, but if the front is still a little...swampy...Comfy Boys says it can turn your swamp crotch into a fresh open field of grass. On a sunny, 65-degree day with low...

The Ashera is possibly the only cat that is acceptable for a single male to own. Because it's about the size of an ocelot, and weighs 30 freakin' pounds. And that's 30 pounds of genetically-gifted muscle, not 30 pounds...