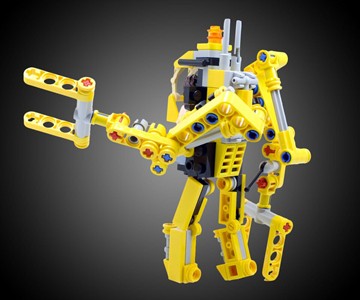 And the Minifig even looks exactly like Sigourney Weaver! OK, as much as I wanted the life-size Caterpillar Power Loader Dustin Kiska made, I find Ichiban Toys' LEGO version just as enticing and commendable in execution. Plus, at $39 instead of $1,600, it is slightly closer to my golden price range of $20. That means when I charm my mama into giving me $19 in a minute, I'll be mere clicks away from owning a complete LEGO Aliens Power Loader kit. Ellen Ripley Minifigure included!

When Ichiban Toys decided to create a LEGO mecha, they also decided to LEGO-immortalize an icon, selecting one of the first pop culture mechas to ingrain itself in the minds of all young boys and grown ass men of the 1980s: Ripley's Power Loader from Aliens. Now franchise fanboys and fangirls can acquire and assemble this 146-piece kit of brand new official LEGO parts, and battle to expel their own Alien Queens out of the warship, into the vacuum of space.

Recommended for skilled LEGO builders ages 12 and up, the Power Loader kit stacks and connects to form a 2-1/2" x 3-1/2" x 4-1/2" mecha with fully maneuverable arms and rotating claws. Adjustable legs also hinge at 2 points for storming the kitchen at dinnertime, stalking armored guinea pigs, and, like, making the Aliens tribute walk across your desk at work.

Though fake, the Power Loader's hydraulic system gives the illusion of functionality when its forearms move. A protective cage hinges up and down to make way for the Ripley Minifig's entry and exit.

The LEGO Power Loader kit is a Dude Gift for a Geek pick.

Muchas danke to Manny for the Dude Product Tip.

Of course EverBlock can't say it out loud, but one look at these big ol' building blocks, and it's obvious what they are: life-size LEGOs! I first wrote about EverBlocks in 2015, but with the pandemic and WFH requirements...

You just spent nine...hundred hours putting that master-level LEGO set together, so Wicked Brick figures one of their display cases might be in order to protect and show it off...