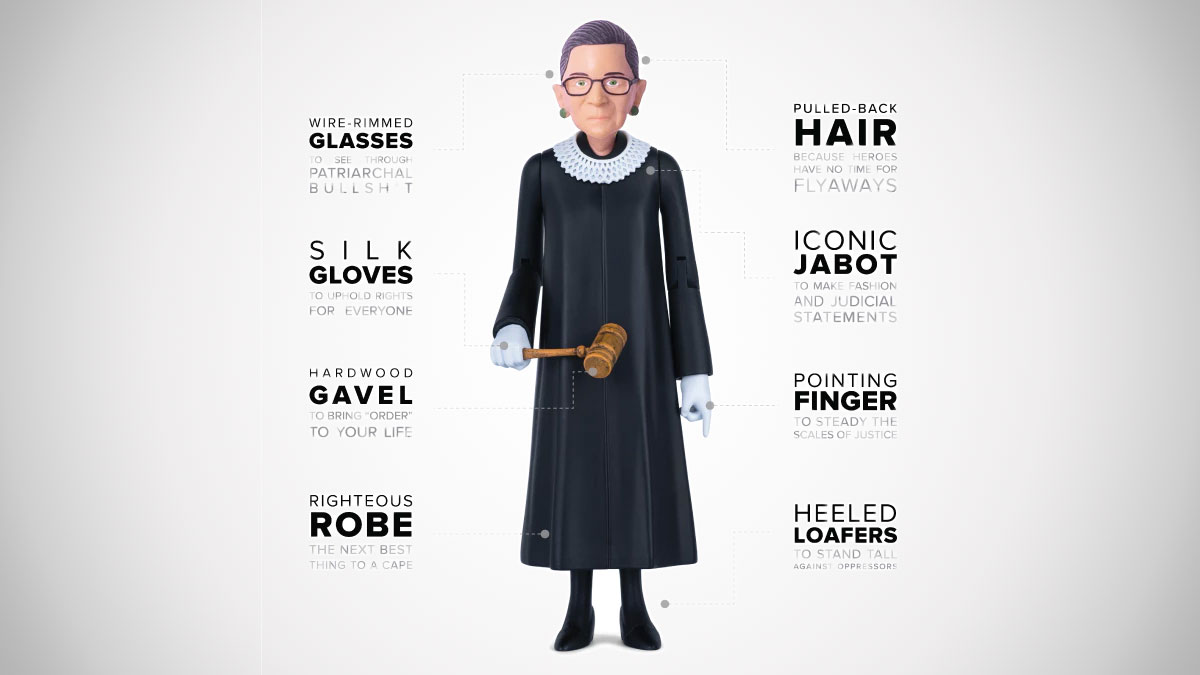 RBG isn't quite there yet though. FCTRY is making the poor 85-year-old Justice crowdfund for her legendary desktop toy status. She only has until July 10, 2018 to raise $15,000. Come on, FCTRY! The Supreme Court isn't versed in campaigning to raise funds. You can't expect RBG to hold rallies and run ads and...what's that? Oh.

Apparently RBG doesn't have to lift a finger gavel to become a mack at fundraising. At printing she had over $330,000 of a $15,000 goal with over 2 weeks left in her campaign.

The Ruth Bader Ginsburg action figure, like all of FCTRY's political sculptures, are designed by sculptor and caricaturist Mike Leavitt. He creates the prototypes in clay, and FCTRY copies them in a PVC-ABS plastic combo. RBG will stand around 6" tall and have 7 points of articulation.

What happened to poor Boba Fett? It looks like some jealous Stormtrooper whitewashed him in Photoshop. I don't know if I can condone this action figure, even if it does represent the Star Wars franchise's initial vision...

Just when you thought your Cup Noodles and microwave Ramen couldn't get any sexier, the geniuses at the Japanese brand FuRyu went and made this series of instant noodle lid stopper figurines. The ladies range in appearance...

LEGO my head! Your personalized LEGO minifigure awaits, at least from the neck up, courtesy of your submitted photos and Funky 3D Faces' 3D printing skills. The Etsy shop will transform any man, woman, or child submitted...

After I saw Jurassic Park as a kid, I thought Dr. Ian Malcolm, and by proxy Jeff Goldblum, was The Man. Then I saw him on Hot Ones last season, eating vegan chicken wings and talking about how his voice doctor said he...

I had forgotten I started working on this Hannibal Lecter Action Figure post and left my computer for a few hours to eat some sloppy joes and self-serve fro yo, and when I came back I was looking right into the muzzled...

Outstanding. Not just that it's a life-size Mark 42 statue from Iron Man 3, but that whomever forged it deemed "life-size" to mean "Robert Downey Jr.-size", which is actually more like garden gnome-size. Good thing Iron...

I bet I know what's been missing from your Christmas mornings: profanity. Lots and lots of profanity. And also Quentin Tarantino (which might explain the lack of profanity). Well guess what, dudes, thanks to toymaker...

SN Herder has thought a lot about the Force awakening. So much that his mind went...there. First the gutter, and then the toy bin. Herder says he made The Extremely Unofficial and Highly Unauthorized Star Wars Kama Sutra...

I see your face on a wedding cake topper, and raise you your face on a Joker action figure. Have people always complimented your Batman-esque jawline? Admired your Superman benevolence? Bowed to your biting Joker wit?...

The one thing I know about Kotobukiya's Zoids is that even if naughty boys and girls receive them as gifts this year, only good--as in skilled and nimble-fingered--boys and girls will get to play with them because these...

Instead of outgrowing your superhero, fairytale, and cartoon character childhood toys, let them mature with you. Preserve their magnificence, and thwart being labeled a creepy action figure nerd, with Evil Robot Designs'...