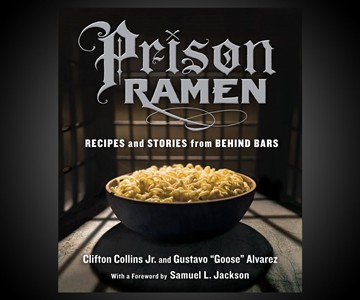 Good thing Shia La Beouf spent 25 hours in a New York City jail for acting like an asshat at a Broadway musical a couple years ago, or else the world may never have had Prison Ramen: Recipes and Stories from Behind Bars. And, more importantly, Shia's recipe for Egg Ramen Salad Sandwiches.

Clifton Collins Jr. co-starred with LaBeouf in 2015's Man Down. He released Prison Ramen with childhood friend and ex-con and Gustavo Alvarez shortly thereafter. The book is an anthology of inmates' tales of life behind bars paired with 65 of the best meals they've ever concocted from Ramen noodles. Such as:

Ramen Goulash. Black Bean Ramen. Onion Tortilla Ramen Soup. The Jailhouse Hold Burrito. Slash's J-Walking Ramen (yes, that Slash). And Orange Porkies, chili Ramen with white rice, half a bag of pork skins, and orange-flavored punch. Pretty much anything the prisoners can get at their commissaries, and you can get at the gas station convenience store.

The stories that accompany each recipe are as organic and undiluted as the dishes are processed and stuffed with preservatives.

complements its quirkiness in eating with the "scared-straight reality" of prison life.

The Cooking Guide Apron was made for all the home chefs and recipe enthusiasts out there who...just can't keep track of how many ounces are in a cup, and how to tell if the steak has hit medium without sawing it open...

X marks the ounces. The pounds. The grams. And the milliliters in Eva Solo's contemporary Digital Kitchen Scale. The Danish design is a minimalist, yet eye-catching, take on standard food scales, with its bright red hue...

The SIFTR Can Strainer & Mini Colander looks like it might work a little better than my method of straining the liquid out of canned goods, which is to place the jagged-edged lid of the opened can back inside it and smooooosh...

Whoa. Check out The Bartender's Manifesto's Guide to Citrus Garnish Styles section. I am amazed. Not only at the number of citrus garnish styles in existence, but also in how this manual of How to Think, Drink, and Create...

"I just did 9 months on the inside...and now that I'm out, my mom is making me wear an orange onesie that, for some reason, encourages many who see me to double-bump a fist against their chest and flash me two fingers."...

Honestly, The Christmas Movie Cookbook doesn't appear to have many recipes I'll actually want to make - or even request my mama make for me. Old Fashioned Meatloaf from A Christmas Story? Chicken, Broccoli, and Cheddar...

I doubt these Workstation Kitchen Sinks from Ruvati are DIY installs, so in addition to the cost of buying one, you're going to have to suffer the cost - and hassle - of hiring someone to put it in. But still...damn...

The Garbage Pail Kids Cookbook is on its way to win the hearts and destroy the kitchens of all the Messy Jesses and Messy Tessies out there. I believe the 35+ recipes it contains are even edible!...

Ahhh, summertime. Smells like freshly cut...margaritas. Thanks to the TailGator, a blender with cajones the size of a 25cc Poulan 2-stroke, 2 1/2 horsepower gas engine. It's not a new product - or the only one of its...