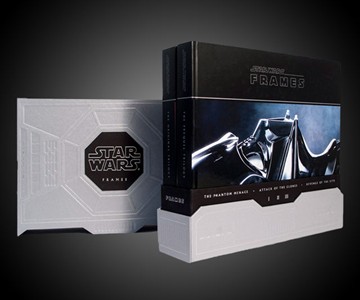 Now that I've finally seen and peed my pants over a full-length teaser of what Episode VII: The Force Awakens has in store, I thought I would spend the rest of the night reflecting on the riveting brilliance of Episodes I through VI. In 2013 George Lucas, ever the Star Wars fanboy, capped off a 2-year project during which he combed back through his saga frame by frame. He isolated and extracted those he felt epitomized the series and stood on their own as captivating works of photography and design. The result, released in October 2013, were these boxed first edition hardcovers, Star Wars: Frames.

With introductions by Guillermo del Toro and J.W. Rinzler, Star Wars: Frames condenses the 1+ million frames of 6 feature films into what Lucas feels are their best 1,416. The shot-by-shot selections unfold throughout 736 pages and 2 lavish volumes primed for collectors' bookshelves.

For those who already own, or don't want to spend quite that much money on Frames the books, Star Wars Frames: 100 Postcards is now available for pre-order, with a scheduled release of November 10, 2015.

Meet the Starkiller, here to make you the star of a killer party...especially if you're hosting a bunch of Star Wars fans. The lamp and liquor dispenser from Rustic Design features industrial pipes, metal hardware, and...

No longer must you search the galaxy to find this Rebel Bass, but you will have to wait at least 3 months to get it. Last Fall, after photos of his custom Star Wars guitars had gone viral online, Englishman Doni opened...