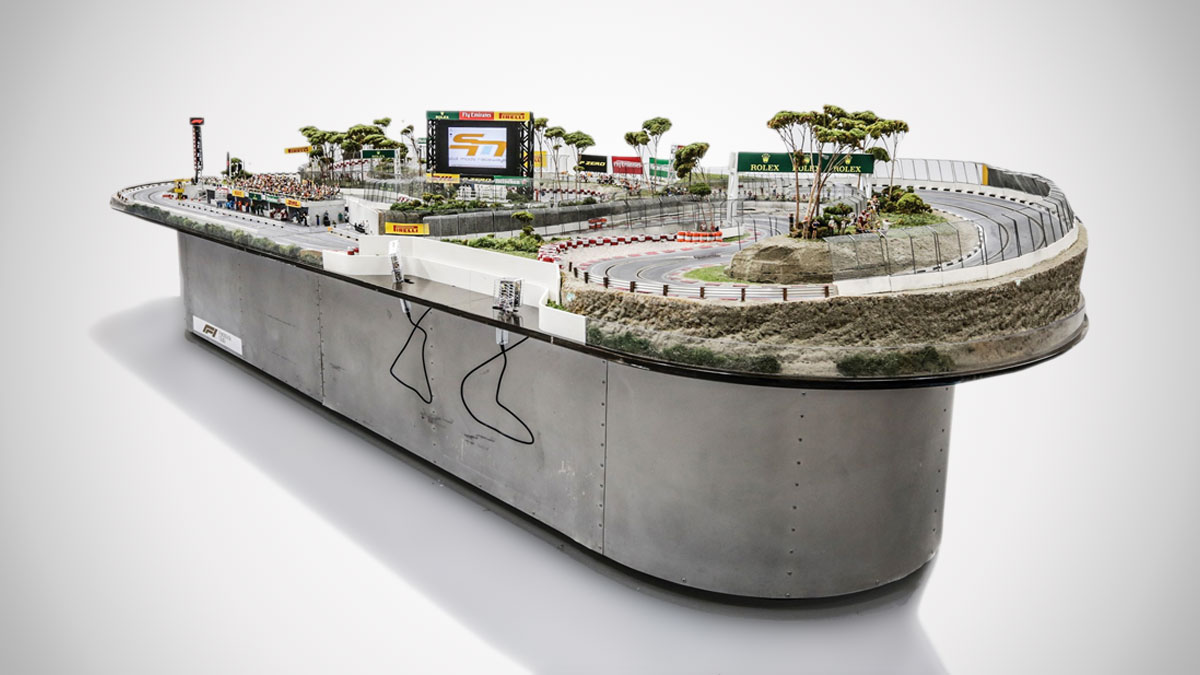 Formula 1 die hards might be the only ones willing to bid on this 1:32 scale Formula 1 Slot Car Racetrack up for auction, but anyone who's a fan of the sport - or of replicas, or of cool shit in general - can appreciate the time and skill Slot Mods Raceways put into custom-building the exceptional, and functional, slot car track.

Made of wood and fitted with a built-in electronic lap timer and on-track cameras, the track is designed for two Formula 1 cars to compete in true head-to-head races. Hand-painted mini fans will cheer them on from the stands as bespoke buildings and foliage lining the circuit add some additional visual splendor, plus serve as obstacles to avoid crashing into.

The Formula 1 Slot Car Racetrack also brings some history to its eventual owner; over the course of the 2018 Formula 1 season it traveled to every Formula 1 Grand Prix, and saw use by patrons of the Formula 1 Paddock Club. Proceeds from the racetrack replica's sale will go to the Last Mile Fund, inspired by His Highness Sheikh Mohamed bin Zayed’s global health campaign to eradicate preventable diseases, a joint initiative with the Bill Gates Foundation.

Downgraded in size, upgraded in awesomeness. These J3SIM Professional Racing Simulators have been tailored for both race centers and home use to give drivers the same adrenaline explosion and propensity to projectile...

These Carbon Fiber Race Track Drink Coasters are light, fast, and slick. Which is exactly what I myself am going to be long about the 6th beer I set on one of them this 4th of July weekend...

Street-legal Formula 1 car for your collection? From British supercar manufacturer BAC comes a run of Monos for the wealth-blessed and speed-obsesseds' taking. These seductively futuristic road rockets combine lightweight...

Artificial intelligence and robotics, the virtual reality video game and the actual reality physical game, Anki and iOS: these are the parts of Anki DRIVE that make it a whole new experience in the gaming industry. A...

Sidecar on the loose! As sweet as Vanderhall's forthcoming Venice Speedster looks with its vintage, Bond-approved design, it does make me think of a wee sidecar that got severed from its motorcycle master. Or, given the...

What childish fool would want to make his Ford Escort sound like a Ferrari 512?...

Sorry, dudes, someone has already claimed the one and only La Voiture Noire Bugatti plans to produce. But there's good (OK, bittersweet) news too: the "Bugatti enthusiast" who made the purchase handed over $19 million...

Hype for Bugatti's latest hyper car is out: the Bugatti Centodieci is a take on and homage to the French auto maker's EB110 super sports car, itself made in the 90s in honor of Ettore Bugatti's 110th birthday. The EB110...

"Steel on steel on rubber on road." And also some sweetness and spice so you won't make the ladies gag. Sunoco Burnt Rubber Cologne seeks to bottle the essence of racing so you can enjoy your fast and furious experiences...

Earning the title of World's Fastest Hypercar...available for consumer purchase...means hitting a top speed of 265.7 mph at the United States Naval Air Station Lemoore in Central California, and claiming to still have...

Anki OVERDRIVE goes Fast & Furious with its Toretto-tinted edition, set to start shipping later this month. If you're not familiar with the Anki gaming family, meet virtual REAL-ality. A simple car racing game in fundamental...