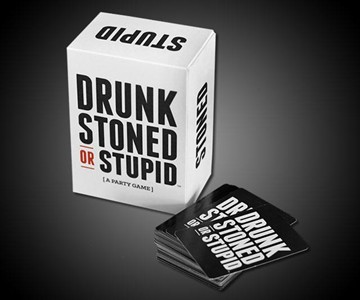 Usually the only people I credit for being clever, relevant, and hilarious are myself and sometimes Stephen Colbert, but the cards of party game Drunk Stoned or Stupid demonstrate there might be a few others out there deserving of the compliments. Two of their names are Trevor and Noah Mayer. The Brothers Mayer, along with input from friends, family, and fans' emailed suggestions, have amassed hundreds of irreverent descriptions of people and their actions, and stuffed the best of them into a box of 250 cards. Each round, Drunk Stoned or Stupid players read one of these cards aloud and determine which player is most likely to:

Like Cards Against Humanity, but swayed more towards personal attacks and arguments, Drunk Stoned or Stupid digs into how well you really know your friends. Gameplay begins with a declared judge drawing a card and reading it aloud. The player to his left then provides a story or convincing reason for someone in the group to be "tagged" with that card, and the accused must then defend himself. Moving around the circle, each person gets a shot at assigning the card to someone else and giving supporting evidence. The judge makes the final ruling, and hands the guilty party the card, along with -1 points. A new judge is then selected and the sequence begins again. When one player reaches -7 points, the game ends and he is declared the Drunk Stoned or Stupid loser.

These Vintage Bookshelf Board Games from WS Game Company are, to quote the late, great Chris Farley, awesome! I mean, have a gander yourself. Vintage Monopoly folded and packed up all tidy to look like a book: awesome!...

100 Games to Play with a Stick

No, 100 Games to Play with a Stick is not about your penis. But, like your penis, it does make a great gag gift...

Unlike run-of-the-mill kitten explosions, Exploding Kittens: NSFW Edition contains content that is not suitable for your workplace or children. And even though no one seems to be saying it, I'm guessing a card game featuring...

Lewd and Obscene, according to creator Anthony Annese, is what would happen "if Urban Dictionary and Balderdash had a one night stand and the condom broke." Testament #1 to the validity of that statement: mentally rotate...

Fowling is pronounced like "foal" not "fowl," but it's not fooling anyone into thinking the majority of gameplay is going to consist of the latter. In both iterations of the homophone. Combining football and bowling into...

Superfight! instructs us to imagine Cards Against Humanity meets Apples to Apples. For the sake of what comes next, I would add to imagine this meeting takes place in either a dark alley, an octagon, or on opposite ends...