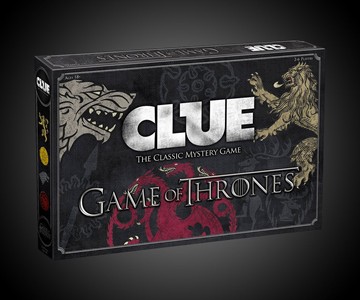 Remember that one time ThinkGeek released a Game of Thrones edition Clue? It had 69,120 possible suspect / location / weapon combinations* spread over 48 suspects, 30 locations, and 48 weapons! That was awesome! But then when you clicked on the game's purchase link you found out it wasn't real. It was an April Fool's joke. That was not awesome.

Until now. While ThinkGeek is no longer involved in Westeros bloodshed, board game magnate USAopoly has stepped in to release this Game of Thrones-themed Clue. It's not as cool as the fake one--I mean, only 12 suspects and 6 weapons--but I guess it gives you a slightly greater chance of actually finishing a game once you start to play. The board is 2-sided, custom-designed for sleuthing out murderers through either The Red Keep or Meereen.

Wonder what kind of damage concrete dominoes do when you knock them over. This Juego de Domino set is made by MDC, a concrete design studio based out of Mexico City. And, perhaps for the first time in contemporary history...

Having trouble getting ice time...on the curling rink? Worry not, because the Curling Zone indoor curling game brings the Olympic sport's laser precision and watching-paint-dry excitement right to your living room! The...

In today's world, The Change Game could mean anything. A TikTok challenge that times who can change from work clothes to sweats the fastest (in honor of and sympathy with those of us returning to our offices.) A bit of...

Usually the only people I credit for being clever, relevant, and hilarious are myself and sometimes Stephen Colbert, but the cards of party game Drunk Stoned or Stupid demonstrate there might be a few others out there...