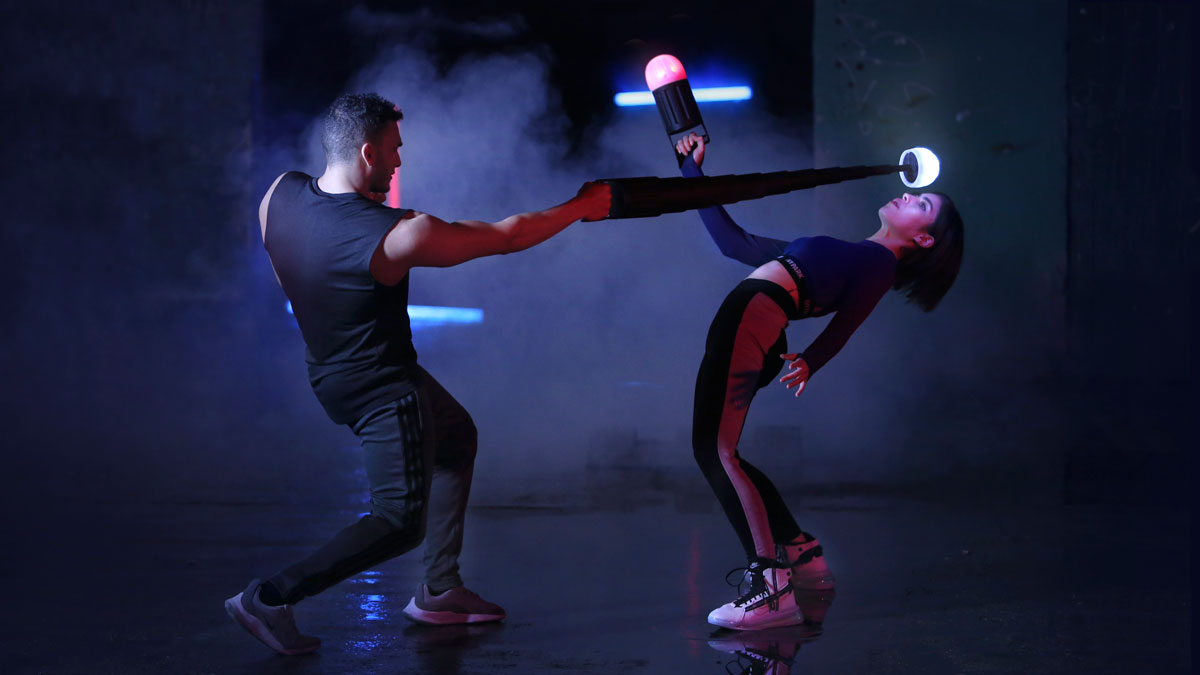 JABII is all about IRL duels, so you'll need at least 2 JABII arms to set up a match (i.e., there are no options to stand in front of a TV screen and battle a computer opponent.) The JABII arm consists of a soft rubber front and 42 built-in spring coiling for jabbing and POW!-ing. The coils help strengthen strikes, plus adjust the force upon impact and reduce the effect of gravity for any player's strength and body size, keeping battles (relatively) safe for everyone, and more about skill and technique than pure power.

Behind the JABII fist and arm are a series of sensors, plus Bluetooth and software technology, that pair with the augmented reality JABII app to track moves, award points, and adjust players' health ratings to determine knockouts. Within the app you can also customize your avatar, change combat settings, track stats, and record matches real-time.

Your dreams of being bitch slapped by a robot? Meet RXT-1. He makes dreams come true. A forthcoming "robotic striking coach" from STRYK USA, the RXT-1 mounts to your wall and uses 4 removable padded arms to spar with...

Nexersys calls their King of the Ring arcade game a "virtual fighting ring" but one look at all those full-contact pads and the surrounding cage and I am 95% sure that I would sustain non-virtual injuries while using...

Quiet Punch, a square of spring-mounted heavy bag that installs in a doorway, was designed for fighters looking to train outside the gym. But now that the punch buddy is available for pre-order, I think it might set up...

I don't know how long the rest of the world will remember the Conor McGregor vs. Floyd Mayweather fight after it's over, but anyone who drops $6,500 on a David August Fuck You pinstripe suit like the one McGregor wore...

Oooo, da ball's flyin' back at my face. Better punch it again or it's gonna fall! The OODA Ball combines the weight of a medicine ball, with the tactile sensation of a boxing bag, with the bounceback-right-at-your-kisser...

Does your baby have a sick right hook? A certain-nose-bleed front kick? A surprise wee-to-the-kisser move? The Buff Baby Speed Bag is a crib or carrier hanging toy that will help hone their skills on something other than...

Nobody show the Liteboxer to She-Ra: Princess of Power. She just barely crammed a Peloton into our dining room - it's the new head of the table - and I know if she sees this new rhythm-based boxing fitness machine our...

This Boxing Glove Sectional Sofa is a sight to behold. A real trophy piece for a fight lover. It also looks about as comfortable as a left jab to the face from Ali...

The Sock Him Stan doorway punching bag gives aspiring boxers, MMA competitors, and people who just like to hit stuff 3 things neither the Boxaball nor the Aqua Training Bag can: 1) the

It seems to me the AquaBLAST Underwater Punching Bag is what boxing would be like in one of my nightmares where I can only move and do stuff in slow motion. In other words: Not. Cool...

Aqua Training Bags bring punching and kicking to the masses. The pros too. Whether you're in MMA training or just looking to add boxing to your gym or home fitness routine, this water-filled bag is kind of a genius piece...

Nothing says, "Happy Birthday, USA!" like a form-fitting pair of stars 'n' stripes shorts and an American boxing the shit out of a Russian in his own country. These officially licensed Balboa shorts hit--powerfully jab...