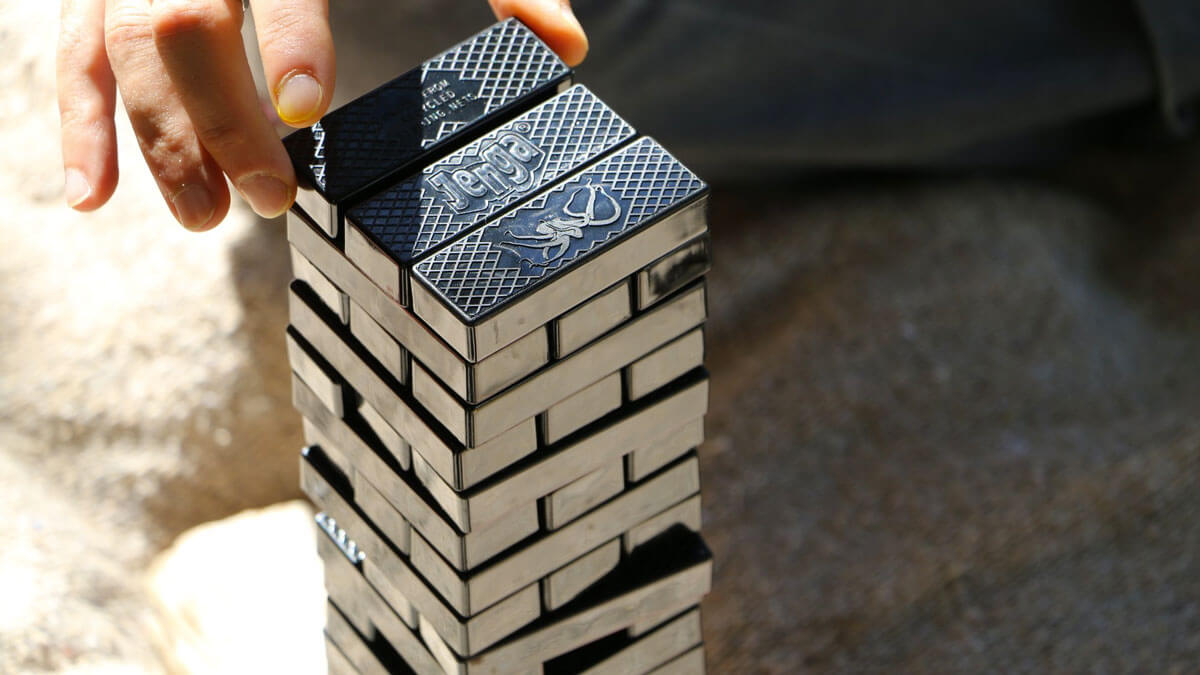 No, cynics, it's not called Jenga Ocean because it looks like a marine oil spill. In fact, Bureo makes their jet black edition of the iconic toppling tower game from 100% recycled fishing nets as part of their overarching ocean conservation efforts. As a company, Bureo both teaches seaside communities how, and financially supports them in their efforts, to protect the oceans, and runs a recycling program in Chile to collect discarded fishing nets, which they say account for 10% of the oceans' plastic pollution. So far, they've collected and repurposed over 175,000 pounds of discarded materials.

Blocks in this Dark Tower are etched with handdrawn marine animal designs, and not just to reiterate Jenga Ocean's theme. They also carry special edition "Save the Animals" rules to help players learn more about ocean threats and things they too can do to help with conservation efforts.

Jenga Ocean is an official edition, and direct collaboration between Jenga and Bureo. Jenga founder, Robert Grebler, approached the company at the 2015 Ocean Film Festival with the idea to turn their recycling nets into his brick towers.

The dudes and ladies behind ShiZap! knew they couldn't solve all the world's problems, but when they sat down to consider their contribution, they concluded they could conquer at least one: how to make Jenga even more...

RampShot calls its backyard game - or beach game, or park game, or tailgate game - "cornhole on steroids," and I don't know if that intrigues or intimidates me. I mean, I once got a black eye from playing your plain ol'...

While the concept and look of the Popdarts suction cup throwing game looks fun 'n' festive, the #1 question I have after reviewing Popdarts photos and literature is: why is that one dude in the lifestyle shot of friends...

Usually the only people I credit for being clever, relevant, and hilarious are myself and sometimes Stephen Colbert, but the cards of party game Drunk Stoned or Stupid demonstrate there might be a few others out there...

Unlike run-of-the-mill kitten explosions, Exploding Kittens: NSFW Edition contains content that is not suitable for your workplace or children. And even though no one seems to be saying it, I'm guessing a card game featuring...

Get ready to maneuver through SpyderPong's web of mashups. The net-on-net table game from Franklin Sports combines elements of ping-pong, volleyball, and 4-square into a single competitive endeavor playable by up to 6...