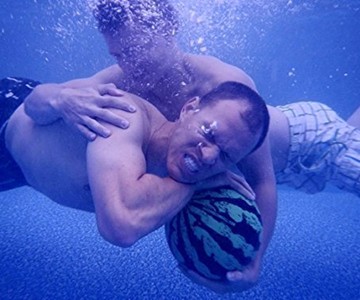 What we have here is a Watermelon Ball, star of the beloved pool game Watermelon Ball. Made with a durable vinyl membrane, it fills with water such that it looks, feels, and floats like a watermelon, thereby enabling a higher intensity and caliber of play than Watermelon Ball played with an actual watermelon. Which leaves only one question:

What the juicy pink-fleshed fruit is Watermelon Ball?

According to the people who make fake watermelons to sub in for the real ones, Watermelon Ball is a "popular water game played in pools, lakes, and ponds all over the country." Hmmm, that explains it...not at all. But from the looks of the photos in my image gallery, Watermelon Ball is probably like rugby. If rugby were played underwater. And with a watermelon.

They say the hose-filled watermelon makes for a better ball than the flesh-filled one because it can be dribbled like a basketball and passed up to 10' underwater as teams try to score goals. Admittedly, that sounds sort of cool. The Watermelon Ball can also serve as a swimming pool exercise ball, which reminds me of the swarm of 70-year-olds who hog my community pool every morning at 7 a.m. for their AquaRobics classes, which might bother me a lot less if they were all doggie paddling to Motown while carrying around prop replica watermelons.

The Watermelon Ball must be filled with water and air to function properly, and comes with needles for doing both.

When I first saw this Motorized Inflatable T-Rex Ride-On Pool Float I thought all my dreams had come true. T-Rex. Pool float. Able to tool around the water via joystick and zero effort on my part...

As joyful as it is to watch a dog try to get its jaws around a fully inflated soccer ball, and end up rolling and falling all over it in the process, this soccer ball made with grab tabs especially for pooch play is a...

Now, can I hook this Hooli Pool Fountain up to my FUNBOY? No? Then, psssh, it will not put "the FUN in multi-FUNctional," as you claim, for this dude...

Cool off with some hot pants. Daisy Duke's got nothing on these Jean Shorts Swim Trunks. More like swim briefs, really, as the faux denim suit is ready to show off your sweet ass and your formidable junk with equal skin...

One time a couple of minutes ago I saw a patio that turned into a swimming pool! That's crazy! Almost Fletcher Capstan expandable table proportions of crazy, and definitely more in compliance with my agenda of spending...

Looks like a watermelon, tastes like a cucumber, pops like a grape. Mouse Melons are itty bitty relatives of the cucumber that look, delightfully, like watermelons sized for your action figures. Or, perhaps in a less...

You know those dreams you have where you're trying to run towards or away from something, but you just...can't...make...your feet...move? It's like running through quicksand, or setting concrete, or...on an underwater...