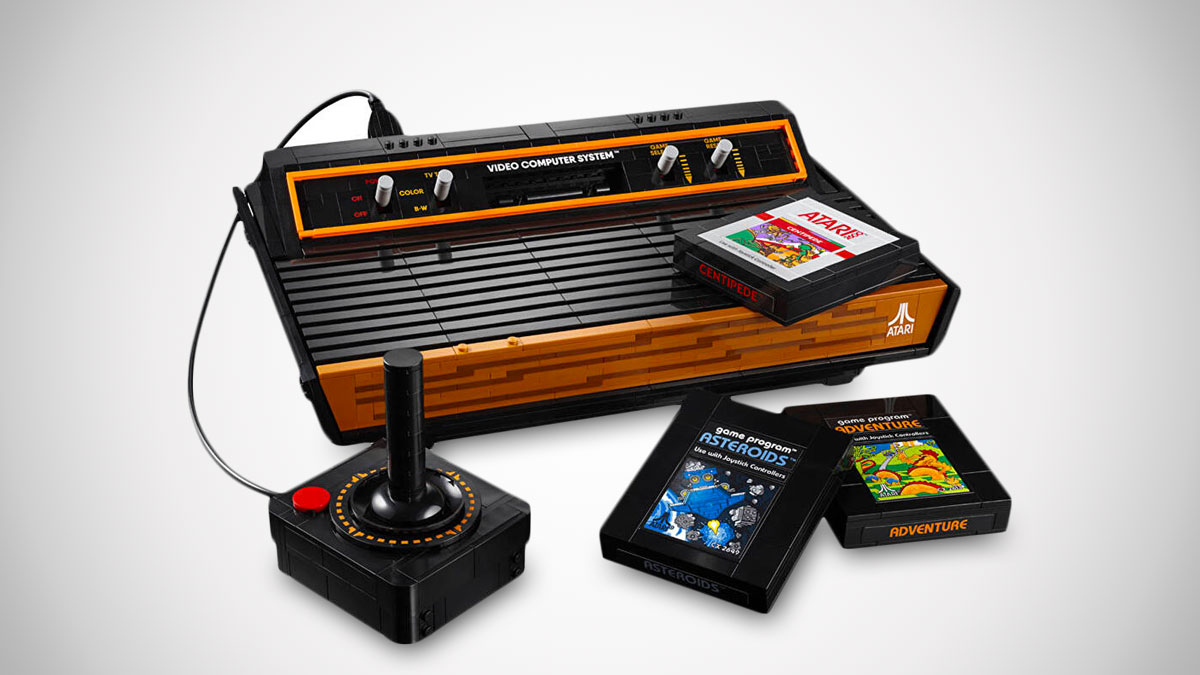 Assembling the 2,532 bricks of this LEGO Atari 2600 building set is going to take, like, 17 hours. AKA the record number I logged for a single day of playing Asteroids when I was 12.

Set to release on August 1, 2022, the LEGO Atari 2600 was almost inevitable. At least once LEGO released their Nintendo Entertainment System kit. Who would have stood for NES getting bricked out over Atari? Not Frogger, and not Centipede, that's for sure.

LEGO's Atari 2600 is a building set for adults 18 and up, complete with Asteroids, Adventure, and Centipede cartridges that slip into the console's game slot, plus scenes from each game to build alongside the gaming system.

This DIY Retro Computer Papercraft Models from Rocky Bergen are fan-frickin'-tastic! And, available as printable downloads, they're also all fan-frickin'-free! A papercraft Commodore 65. A cardboard model of an IBM 5150...

The Atari Flashback portable console is indeed here to console. The handheld 2600 will give a there, there pat on the back to everyone who didn't get an NES Classic before Nintendo announced they're discontinuing them...

A Pac-Man Ghost wouldn't be my first choice for a night light. Isn't the whole point of a night light to ward off ghosts? Make you less afraid of them? Not to mention that Pac-Man Ghosts in particular have a decades-long...

For $500, Answer: Like the Harold and Kumar series, these overdone fads have yet to run their course. Question: What are kitschy 80s throwbacks? If you're 40 and you get this Atari for Christmas, score. Hope 128 bytes...

8-bit space hasn't just not faded into oblivion, it's been supersized and packaged into decal sets of 65 for constant stimulation as floor-to-ceiling wall decor. Blik's movable and reusable wall decals, based on classic...

Whoa, the Pac-Man Ghost Tables are so authentic their graphics even match the pixelated and somewhat-out-of-focus aesthetics of their arcade counterparts. Hmm, between these trippy visual effects, the tables' extra-large...

The supposed beauty of iPhone, iPad, and iTouch is that they put "the power" in users' fingertips. But my fingertips are somewhat chubby and oafish, and basically the lone, crushing reason I don't straight-up own the...

Some guy with perhaps a slightly warped idea of what people are willing to pay for a 1980s video game console has covered a portable Atari 2600 VCS in CNC-machined, yacht-varnished wood and artistic embellishments. Looks...

A red one for Red Sox fans, a blue one for Yankees fans, and everyone stays dry when a downpour--or shit storm--hits Fenway Park this summer. Pac-Man Ghost Ponchos keep their donners dry and mud-free, whilst using their...