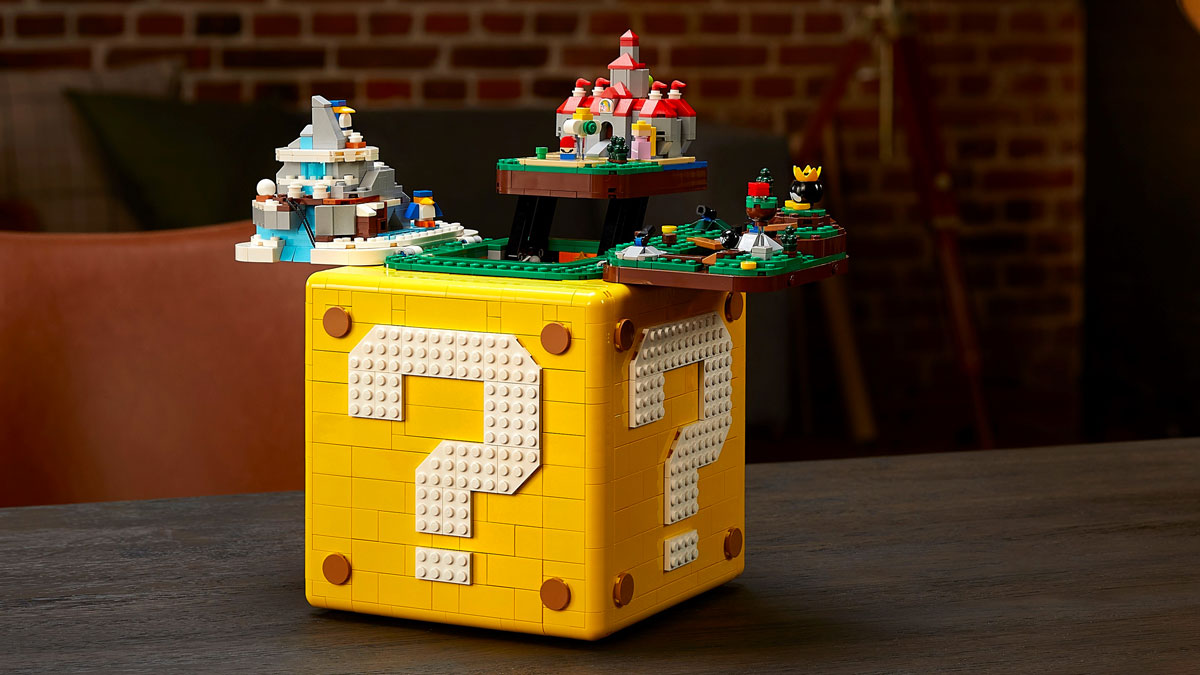 If you thought beating Super Mario 64 was hard to beat, get ready to try to conquer LEGO's new 2,064-piece Super Mario 64 Question Mark Block build. It might feel a little like banging your head against a...question mark block.

I mean, the Super Mario 64 Question Mark Block can't be as tough to build as, say, LEGO's 2017 release of a 7,500-piece Millennium Falcon, but it's probably up there with last year's (much cooler, in my opinion) LEGO Nintendo Entertainment System, featuring a scene from the original Super Mario Bros. on a rotary dial TV. LEGO recommends the set for 18 and ups.

The Super Mario 64 Question Mark Block arrives in conjunction with the 25-year anniversary of the game's launch in 1996. As in the game, this ? Block exterior holds a surprise inside - one way better than a measly coin, and better even than fire power or an extra life. And you don't even have to risk a concussion getting it. Open panels at the top and front of the completed block to reveal 4 iconic levels from Super Mario 64: Peach's Castle; Bob-omb Battlefield; Cool, Cool Mountain; and Lethal Lava Trouble.

Mario's Tanooki Suit. Ten-year-old me could not wait to score the onesie that would give me the power to fly and turn to stone and look like I'm humping the air - or maybe little Toad was under there - on the Super Mario...

Don't let Mario or Luigi near the pipe! It'll blow them up! They might be plumbers, and this pipe might be called a Water Bhomb, but my experience with the situation goes all the way back to 1989. My mama's basement...

1UP! 1UP! 1UP! 1UP!1UP!1UP! As many 1UP! radish-mushrooms as your little fingers and wrists can churn out without cramping up or going arthritic, thanks to Animi Causa's new Ravanello. Did they intend for the shaper that...

Mario never dies inside the pages of the forthcoming Super Mario Encyclopedia. And I just read Nintendo has made 17 - 17! - Super Mario games, so for fans of the franchise, an encyclopedia is definitely overdue just for...

Hot. Sexy. Latex. When I think of Mario Bros. those are definitely the first 3 words that come to mind. And this latex dress captures that perfectly. I wonder how sweaty I would get if I tried to put that thing on? Not...

If you "fertilize" it properly and approach it from the right end, not only will the Piranha Plant not kill you, it will actually ease any pain you may have, and make you feel blissfully content. Though also maybe hungry...

The lamp is a 1" black iron pipe and its fixture is a vintage recycled glass insulator and the Mario hovering above the decorative green pipe is the light pull! Sweeeeet! Mama! I need to borrow 199 dollars. And 35 cents...

The guns, swords, and Personal Information Processors you wield on screen may not exist in real life...yet...but many, many attempts at replicating them do. From old school to new school, computer to console, fantasy...

The resurgence of 8-bit Atari and Nintendo games in non-Atari and non-Nintendo forms. It's a phenomenon of second-decade-of-21st-century culture. Like zombies. Like bacon. Like, a wise soul pointed out to me the other...

Here's a good way to keep strangers from touching your kid. Jeanette and her Naturally Crafty Etsy shop have craftily pounced on and taken down the scowling, snarling, pixel-thirsty King of the Koopas, and Mario's arch...

Pipes, mushrooms, a Cape Feather or two, and it's even a real, useful map of the New York City subway system. The Super Mario NYC Subway Map salutes Super Mario World in its pixel-by-pixel mass transit trek through 16-bit...

It may not be a block, but crack your head against this yellow question mark and you'll still enjoy the spoils of gold coins and a mushroom o' added life. Or at least a temporary increase in energy from its 58 or so grams...