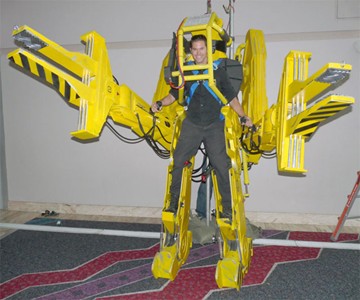 It may not muster the technological sophistication of the Kuratas rideable battle mech, but I'd still rather have Dustin Kiska's Aliens Caterpillar P-5000 Power Loader replica because Kiska built all 200 pounds of it by hand in his Albuquerque garage and Albuquerque is in New Mexico, which is part of the United States, which means if I get the Power Loader my grandma will not hassle me about owning something made in Japan. In this case, my grandma's opinion is important because she will be giving me the $1,600 I need to buy the Alien Queen eradicator. Don't worry, she'll get to ride it too. Once.

At 120" tall x 72" wide x 72" deep, the life-size hydraulic utility vehicle replica incorporates wood, Styrofoam, found objects, latex paint, spray paint, and cardboard. All joints move and hydraulics expand and contract. When asked to comment on Kiska's Caterpillar off the record, a representative from the US Colonial Marines stated, "Yeah, I'd pay to see Sigourney Weaver manhandle that thing. And she's, like, 70 now."

Me: One 13-foot-tall, 9,920-pound menacing robot that I can either ride and pilot with mere hand and body gestures from a cockpit, or control remotely with my 3G connection, please...

Designing the Yardroid to look like a mini tank is pretty much all they needed to do to make me want this smart landscaping robot. But Yardroid takes the whole robotic lawn mower concept, like, 8 steps further with both...

Sorry to all the Veruca Salts out there, but you can't have a Ripsaw M5 Robotic Combat Vehicle or an Oompa Loompa. Willy Wonka and the US Military say no...

A xenomorph is a pretty good choice for a knuckle duster topper I think. According to Wikipedia, these types of Aliens, unlike many others pitted against humans in the sci-fi genre, "do not have a technological civilization...

If you're trying to make a palm-sized robot dog that's a miniature replica of Boston Dynamics' full-size robot dog, Spot, but don't want to be more obvious about it than the clear resemblance to Spot, one good thing to...