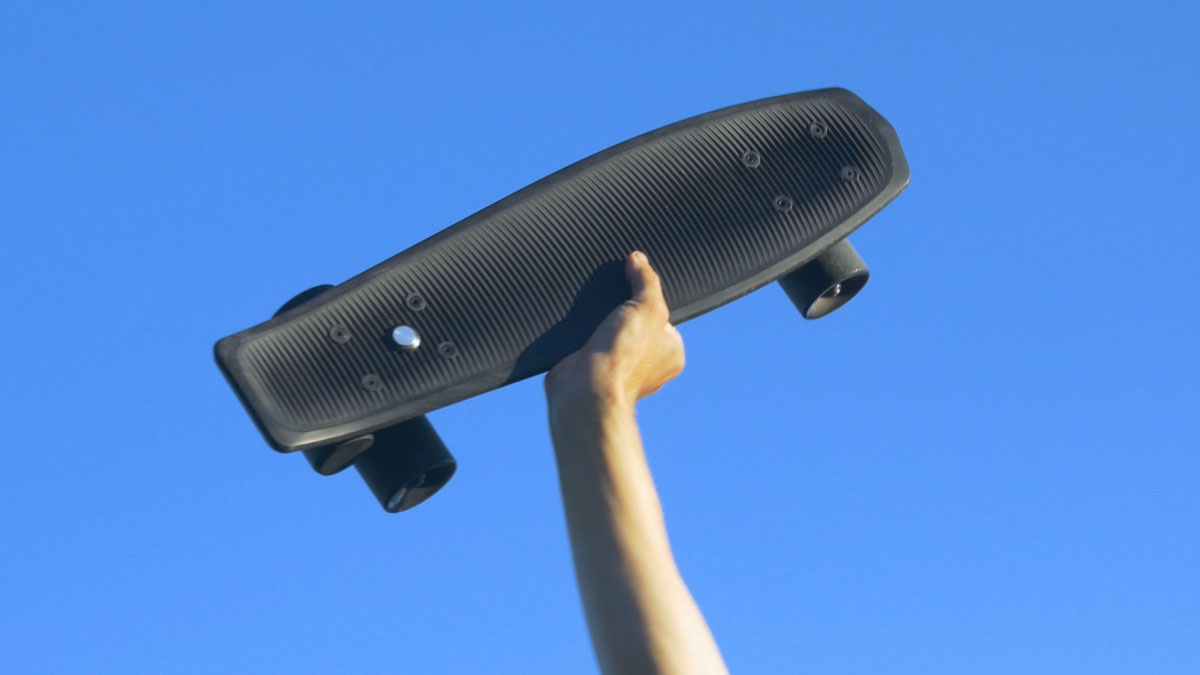 If you're about to lose your mind on your commute, recover it by losing your head. The Headless Electric Cruiser is a new electric skateboard heading - uh, nonheading? - our way in February 2020. It differentiates itself from other electric skateboards by ditching a discrete handheld controller in favor of foot-controlled power.

Riders create initial Headless Electric Cruiser motion with good ol' knee grease - a manual push-off. From there, their back foot can engage the board's motor via a raised white button on the deck surface. Usage is binary: step on the button to power up, release it to coast. Those who want to go faster can continue with the legwork, kicking like they would on a traditional skateboard.

On its own Headless Boards designed the Electric Cruiser to maintain speeds of up to 12MPH for 6 miles per charge, but they say riders willing to add in their own manual effort can increase these number significantly.

Headless' goal with the Electric Cruiser is to create "a new category of electric skateboard, one that seamlessly integrates electric power with the simplicity of a traditional skateboarding experience...." At printing they were offering the board at a pre-order discount of $229. Regular retail price will be $299.

As a commuter or personal transporter, the Electric Cruiser keeps a pretty low profile. It weighs 5.5 pounds and measures just 22" long.

Tokyo-based Cocoa Motors refers to its forthcoming WalkCar personal transporter as "the world's smallest car," and a "laptop-sized super car," and are you thinking what I'm thinking? Was something lost in translation...

If the tires make the scooter, then yep, this is a Phat Scooter. The Phatty and Phatty Sport are all-electric scooters that swear on a double bacon double cheeseburger topped with onion rings and a fried egg their performance...

I gotta give Segway and their Ninebot Electric GoKart Kit some credit. Not only does this company persist in releasing new products despite being the butt of so many jokes - from Segway tours to mall cops to George W...

Uno, dos, tres...Bolt! You won't go 0 to 60 in 3.5 seconds - or ever - on the Uno Bolt, but you will have the privilege of scooting away lickety split from the lady who caught you helping yourself to her plum tree (hey...

Now I was never so good at Rollerblading even when my wheels weren't under the power of two 1000W motors, so I know what I think about Thundrblade electric inline skates: medical disaster...

Unagi hopes you'll fall for their latest scooter - an ultra-portable, still-powerful, super-smart electric transporter - and turn it up to Model Eleven...

Concept?! But it looks so real! The City E-Bike is an electric, commuter-friendly motorcycle concept from industrial designer Vojta Vyroubal. It's compact and stylish - I mean, presuming you agree with me that looking...

Sit 'n Spin + Wheels + Penchant for Collision (or Poor Dexterity & Depth Perception) = Kidzone Ride-On Spinning Bumper Car! Kiddos ages 1-1/2 and up, get ready for the ride - and the twirl! And the impact! - of your life...

The INU sounds cool. It's a completely connected folding scooter configured to send text messages, make a road movie, or take a selfie right from the handlebars. The folding mechanism is automatic and smartphone-controlled...

Polar vortex got your car buried under 10 feet of snow? Grab your SUPERRIDE S1000 and go all self-balancing electric unicycle on Mother Nature. No winter storm stands between you and your access to The Tamale Spaceship...