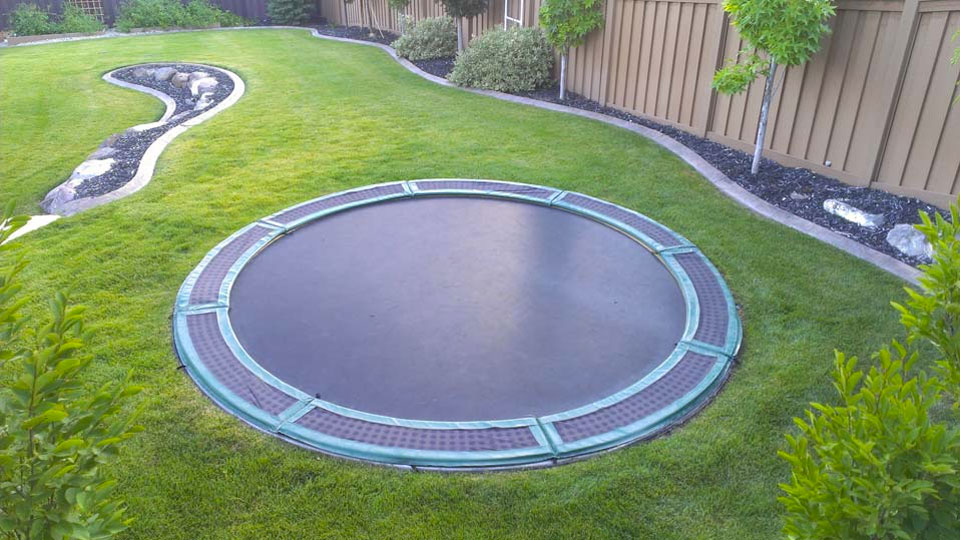 Drugs & alcohol, bullies, gluten--parents have got a lot of evils to worry about as they raise their children these days. So I get why a lot of them are anti-trampoline. Why add flying off a spring-loaded canvas bed and cracking one's skull open to the list of kid concerns?

Because, Daaaaaad, they're so fuuuuuunnnn! Please, pleasepleaseplease can we get one?

Here, Trampolines Down Under has made a move to help parents retain the love and admiration of their children, without relinquishing all control over whether or not those children's bones and brains remain intact. The TDU system features an in-ground retaining wall insert that brings the trampoline top and its bouncy-bouncy good time down to ground level.

These in-ground trampolines have surface areas and spring setups similar to traditional trampolines, but instead of legs and posts, they install around the circumference of TDU's wall. The patented wall kit is made of lightweight Polyethylene molding and has a self-locking buckle system that enables consumers to snap it together in just a few minutes. (Note: Digging the hole to put it in in your back yard will probably take a little longer.)

Once in place, the retaining wall is designed to accommodate movement of the overlying surface without letting it collapse under the trampoline. It also preserves a flush transition from the trampoline ring to the adjacent ground so it won't interfere with your lawn care rituals.

In addition to looking kinda cool, an in-ground trampoline is obviously intended to reduce associated injuries. While not completely eliminated as a possibility, falls to the ground are less likely, and if they do happen, it will be from a much lower height. And the TDU system does get rid of any chance of injury from kids walking or rolling under the trampoline while others are jumping.

Oh, and if you live in an area that gets tornadoes or regular wind storms, you won't have to worry about Angry Mother Nature carrying your trampoline away.

The complete TDU trampoline kit includes a 14' trampoline and vented safety pad (the latter facilitates airflow and drainage, and won't get hot to the touch during summer scorchers), and a 14' TDU retaining wall system.

Bomb shelter? Underground fort? Not really. But Dutch designer Floris Schoonderbeek's Groundfridge is big enough for me to pop a squat inside and go all Jabba the Hutt chowing down on the 1,100 pounds food and drink she...

14 Ways to Turn an Interior Room Into an Outdoor Oasis

Winter weather. Pandemic. High-rise urban apartment building. Housing shortage. Correction, affordable housing shortage. These are just a few of the reasons I decided to brainstorm some ways to turn an interior room into...

For ye who seek to build a backyard retreat who have already scrimped and saved, here are some ideas to help you splurge on your endeavor. Hot tubs, hammocks, detached office pods, and huge cauldrons o' fire...

18 Products to Elevate Your Next Backyard BBQ

A Cowboy Cauldron brings together folks from all walks of life. Wranglers can cook out with witches. Dudes from the ranch can grill with dads from McMansions. Fantasy fans can warm their hands across the fire pit from...

EZ Ice says its DIY backyard ice rinks are so fast and easy to put together that even your kids could do it. In 60 minutes! Which means you should definitely get an EZ Ice backyard ice rink and put those couch-lounging...

To welcome and commemorate summer, the best season of the year, I've compiled a list of the best beach, patio & pool loungers. Because, in my opinion, there is no better way to take advantage of long, hot summer days...

The Intex Mini Frame Pool is a deceptive little swimmin' hole. When I first saw it I was like, Dude! An above-ground swimming pool for less than $100! But I should have paid more attention to the name of the product -...

Summer's best backyard games go well beyond croquet and bocce anymore. Not that there's anything wrong with the classics, but when you can elevate the classics to versions that are, say, more neighbor's-window-friendly...

You don't just climb out of this swimming pool, you climb into it too. And I hope you're a good scrambler - or long jumper, or pole vaulter - because Intex's full size above ground pool doesn't come with a lot of other...

If I get the World of Watersports Super Slide, will you provide the backyard? At 25' long, this heat-beating piece of aquatic fun is big enough to accommodate 4 sliders practicing appropriate 6' social distancing at a...