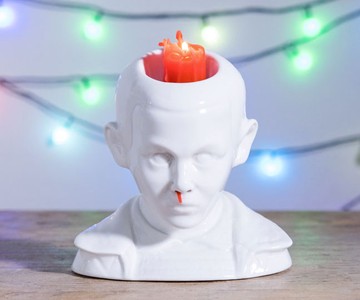 Firebox's candle, based on the Netflix series Stranger Things, depicts a white ceramic Eleven bust whose red taper top melts out of her nose when lit. The effect: a trickle of blood characteristic of Eleven's overextending herself while using her psychokinetic abilities. Here's a GIF. Pretty creepy, eh? She must be working hard.

Which means there's a 0% chance I'm buying an Eleven candle. A bloody nose every time I use it? How long before my house is filled with flipped furniture, broken dishes, and monsters from the Upside Down? Not to mention the cleanup of Eleven herself.

In addition to a pair of red candles to drip the blood, the Eleven bust comes with a "nose picker" tool to remove it and de-gunk her blocked nose after each lighting / psychokinetic episode.

Now I don't know how many people out there who are into candles and wax melts and aromatherapy are also into robots, but if that's your demographic, my dudes and ladies, have I got a Robot Lamp Candle & Wax Melts Warmer...

Take peek-a-boo garters to the next level: peek-a-boo blood vessels and layers of muscle tissue, courtesy of open-wound prostheses and stocking accoutrements from Etsy's Meaghan O'Keefe. A pair of unpainted latex prostheses...

Halloween Ends is coming to a streaming service near you, and possibly to your kids the moment they see this 35-foot inflatable Michael Myers in someone's yard when they're trick-or-treating this year. And in both cases...

Dude's most popular products of 2018 followed some very surprising trends. Weapons. Dinosaurs. Survival gear. Star Wars. Sexy time. Crazy, right? It's almost like that year when the most popular name for parents to give...

The Scranton office of Dunder Mifflin is now LEGO'd for business. Please see yourself to Michael's office to enjoy a chat with the World's Best Boss, the conference room in anticipation of this being the day the DVD icon...

While I would prefer a wax color more masculine than pink, I--What? Pink is the color of unconditional love and nurturing? Oh. OK, Mama.--I guess my mama likes pink. Yep... Working from home today... Anyway, I applaud...

Not even looking at the blurb before I write this: if they want to call it Seinfeld: The Official Cookbook, there better be recipes for a big salad, a chocolate babka, a marble rye, and some motherf'ing soup inside...

WTF does using the term "WTF" in reference to a candle mean? In a nutshell: "Mmmm, this smells incredible! Just like the apple pie my grandma used to make with the shortbread crust and the...gaaaaasssspppp!. W...T...F...is...