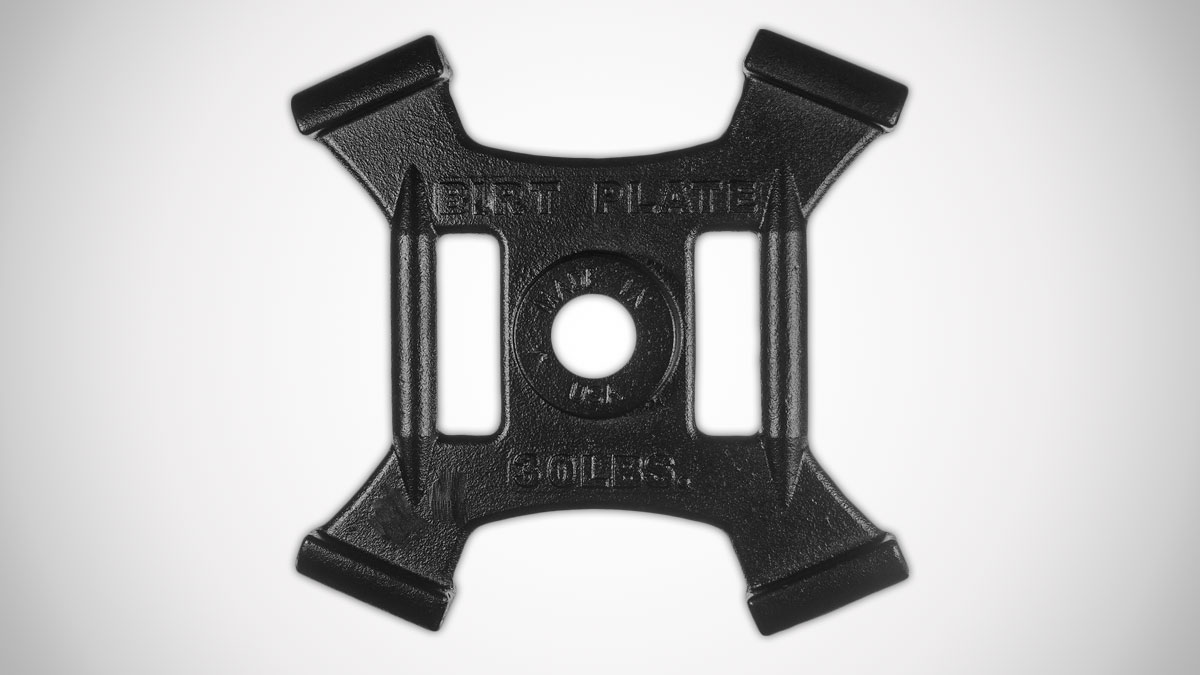 When Ryan Birt created the Birt Plate Strength System, injury was the mother of his invention. A college wrestling champion and football player, Birt injured his elbow in a football game, and found he couldn't lift a straight bar during rehab. He used the round weight plates alone instead, but their grip and design made the workouts awkward and uncomfortable. But they also sent him a vision of an alternative, a plate with handles and an ergonomic shape, a plate he eventually developed into the Birt Plate total body strength training system.

Birt Plates come in weights ranging from 8 to 100 pounds, and provide the foundation for over 200 different single-plate exercises. Their center cutout also allows for traditional plate use on the ends of a 2" barbell, or with added resistance bands.

Birt says his patented Birt Plate shape and movements "are crafted to keep the body in a natural position, allowing full range-of-motion and smooth transitions between individual movements" to produce workouts that are both safe and efficient.

I've seen human pack mules, but before the Load Trainer I'd never seen human weight racks. In this military-meets-Crossfit piece of fitness equipment, Innovative Performance mounts a weight plate post attachment to an...

Your body's desire to lie on the couch with a 6-pack and some tater tachos versus your brain's desire to look like one of the Hemsworths. It's...Civil War!...

Obviously the best thing to do if you want to be as strong and jacked as humanly possible is take a lot of steroids. But since steroids are expensive and mostly illegal and might make you talk like Mickey Mouse, an alternative...

"Pivot" was one of 2020's most pervasive buzzwords. And while Colin and Patricia Montgomery began working on their convertible PIVOT Bed in 2019, and it's now obviously 2021, the transforming bed-to-home-gym still hits...

HYPERBELL - Turn Your Dumbbells Into a Full Home Gym

HYPERBELL knows the home gym I've spent the last year-and-a-half building isn't going anywhere, regardless of when and whether I can go back to group fitness facilities. But, at least according to my wife, we need to...

SISU! is the Finnish word for stubborn determination, and an appropriate moniker for a 28-pound War Hammer that has a predominantly fitness-based application, but could also wallop the ever loving Fuck You out of the...

MonkeyFeet - Lift Dumbbells with Your Feet

Know what MonkeyFeet mean? No more sticking that dumbbell in your sweaty knee crease to do some donkey kicks and fire hydrants. The ability to do ham curls and weighted leg extensions without fancy gym machines. With...

"You lift, bro?" "Naw, dude, I ExoHinge." The ExoHinge resistance exoskeleton - a much cooler way of saying a wearable, hands-free piece of fitness equipment - is a minimalist solution for people who want to lift weights...

A full-body resistance band suit that enhances training and promotes more comprehensive muscle use and development? That's almost as ridiculous as a mouthpiece that reduces oxygen flow to improve lung endurance and athletic...

I didn't wrap up the ARC-NRG PushUp, stick it under the tree, and and call it a Christmas "gift" for my girlfriend. I simply showed it to her a couple days later, completely innocuously, no judgment in my voice when I...

Kettlecross, I appreciate your kettlebell hybrid design - the idea, the thought that's gone into it, the elimination of wrist and forearm stress during use. But I just can't pass up this opportunity to say: Yo, dudes!...