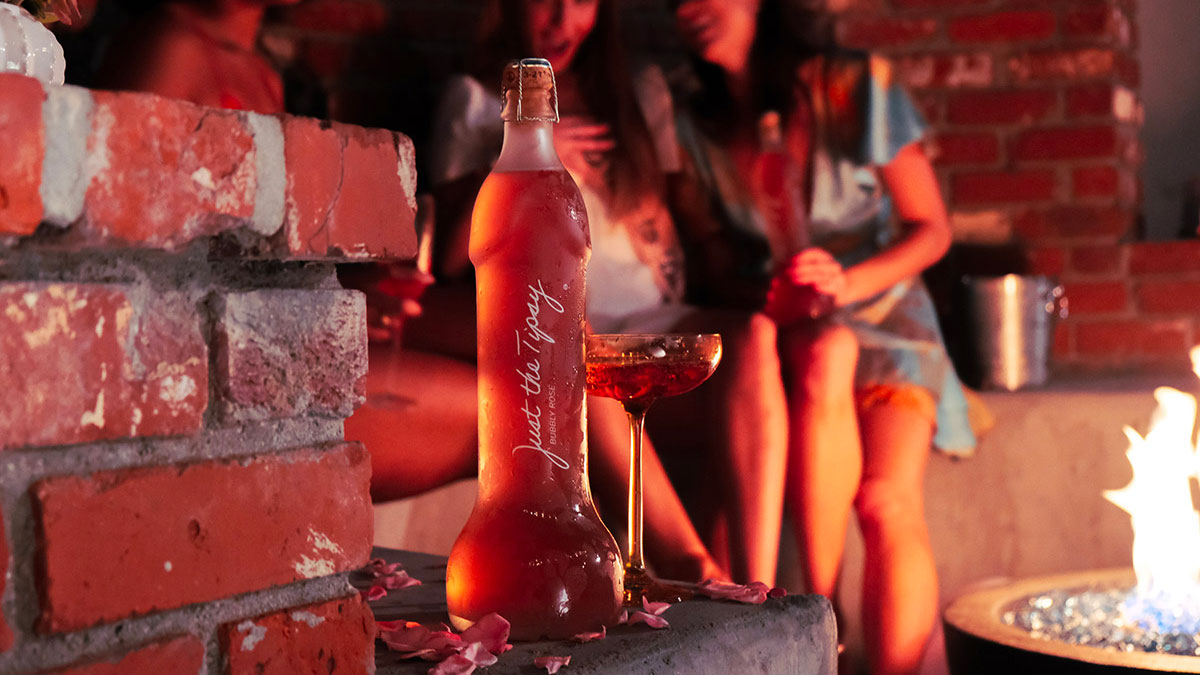 Just the Tipsy describes itself as "just a funny way to spice up your wine experience," and swears it's not aiming "to be crude, vulgar, or offensive." Words that surprised me in their sort of defensiveness and supplication, until I read further and discovered Just the Tipsy Bubbly Rose wasn't created by some cheeky, irreverent ladies, but two dudes. And not just two dudes, two dads. Two dads having a chuckle about how many bachelorette parties their wives had attended, and all the dick decor and party favors that seemed to populate them.

So, yeah, Just the Tipsy Bubbly Rose isn't just a girly wine begging to be drunk straight from its dick-shaped bottle while some snaps pics for Instagram. It's also the ultimate Dad joke.

An 88-piece Champagne Bottle Balloon Kit you can inflate and use to decorate down the stairs, up the wall, arcing over the window, any which way you want?! This DIY decor looks like a job for...not this dude. Uh-uh. No...

Sure, any jackass can sabre open a bottle of Champagne with a kitchen knife. But if I'm going to try that, I may as well just lay my fingers on the sidewalk and chop them off. Save bloodying up my mama's kitchen and wasting...

Bubbles not bullets. Whether you're a child of the flowers or a child of the second amendment, I think we can agree: the Champagne Gun speaks to all of us...

In conceiving their one-handed Champagne gun, Bubbly Blaster must have asked themselves, "What would Han do?" Or maybe they saw if Industries' Han Solo DL-44 Blaster Flask prototype, and decided they could do one better...

Ah, the times my wife has gone to chill out with a glass of wine only to find her wine is not chilled*. But now, hero husband that I am, I can give her this personal wine chiller and be all, "Yo, chill. Here's a VoChill."...

Great. I'm gonna have to start drinking white and pink bubble wine. Because hacking off bottle necks with a Champagne Sabre is the only way my girlfriend's ever going to agree to let me wield a sword around the house...

If I had a kid, BubbleLick-ing would be my father-son bonding activity of choice: he blows, I consume. It might be the only game you'll ever play as a parent that actually gets more fun the longer it drags on...

A partier with a Champagne bottle is basically the equivalent of Ralphie Parker with a BB gun: if they get one, there's a decent chance they'll shoot their eye out. And while the DeVine Champagne Bottle Opener can't do...

The wine lovers I know never have need to set their wine glasses down, but I guess if you're just, like, a wine sipper, having a glass in the backyard or at the park because all the other dudes and ladies are, a WineGrasp...

A Bottomless Mimosa Glass is at least one good thing about having to eat brunch at home for the time being. Even restaurants that claim to serve bottomless mimosas on Sunday mornings are unlikely to have this - or allow...

The Chambong is an elegant glass vessel used for the "rapid and enhanced" (and elegant!) consumption of sparkling wine. Just mind the bubbles, whose population density in champers is apparently, like, 4 times what it...