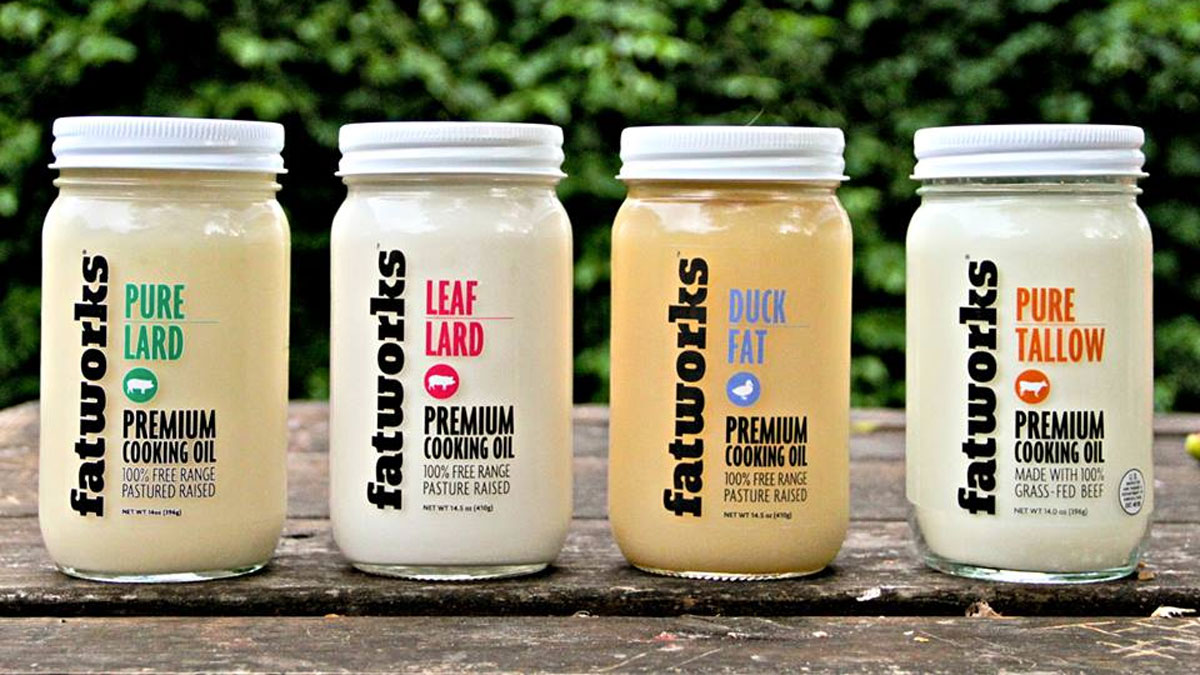 8-ounce jars of Duck Fat are just one of your choices in Fatworks' line of animal fats for cooking. Committed to ending what they consider an unmerited war on fat, the self-described "Fattitude Adjusters" at Fatworks also produce oils including Beef Tallow, Pasture Raised Lard, Leaf Lard, Chicken Fat, Lamb Tallow, and Goose Fat. These real, natural oils were staples in our diets up until the early- to mid-20th century, and some contemporary research suggests they never deserved the bag rap they got during the margarine and vegetable oil craze, and that many of us still find hard to let go of now.

Those who adhere to the Paleo diet or the Weston Price school of thought are Fatworks' primary audiences, but I'd say a close second is those of us who want to eat food cooked in or with oils that make it taste F'ing delicious. Homemade Apple Pie with Pork Lard Crust, anyone?

Dash did not start the electric butter spraying phenomenon. That is, the phenomenon wherein one inserts an entire stick of cold butter into the shaft of a bottle, and a battery-operated heating coil melts it to mist-ability...

I know a lot of fat magnets. I bet you do too. Most of them look more like an ass in need of a run around the block than a reimagined dreidel though. But this Fat Magnet, the dreidel kind, is actually here to help the...

Got a fat head on the wrong end? Faded Days isn't the only brand that makes polarized XXL sunglasses for people with big heads, but they do seem particularly committed to the process. First they ran a wide-head-sunglasses...

1. Check out the video above of a dude dumping Hershey's Chocolate Syrup on a white Keds tennis shoe treated with NeverWet. 2. Be amazed by NeverWet's water-, oil-, and apparent chocolate-syrup-repelling technology. 3...

Coffee and muffin...top, anyone? This Fat Belly Mug is described as "cute," and I guess that's true, if you're into the dad bod look. Admittedly, it is also very cute 'n' clever that the handle of the mug is formed by...

Whether you're looking to cut back on the butter or blanket your whole life in a dewy sheen of it, the forthcoming biem Butter Sprayer could be as revolutionary for your popcorn and toast as the Slotdog is for your wieners...

GasPods promise an average savings of $120 per car per year. So, no, applying the aerodynamic champions of fuel efficiency won't result in a bank account boon of exotic Asian vacation proportions...or even really Japanese...

All you metric-driven, body-conscious visual learners out there, it's time to get Naked. And anyone else intrigued by the idea of using regular 3D body scans to track health and fitness, you might want to give this full-length...

Easily make medicinal butter, oils, tinctures, lotions, and sauces. Hear that? MagicalButter is so named for its power to convert healing herbs into healing herb culinary creations. So start coughing and breaking into...

I always thought my car required an oil change every 3,000 to 5,000 miles out of necessity, but according to Lubricheck, I shell out my precious duos of Andrew Jackson, 7th President of the United States and fellow Pisces...