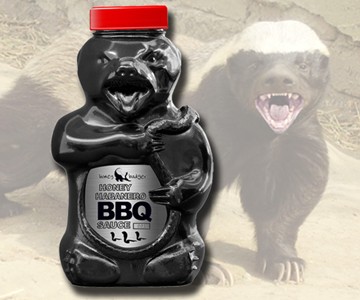 This ain't no Pooh Bear honey. Fortified with freshly chopped habanero peppers, the meaty smoke of a hot grill, and a subtle dose of bee nectar, Honey Badger BBQ Sauce will grab you by the nuts, make you lick the sun, and then lure you back with a kiss just sweet enough to leave you begging to do it all again. Taste buds, prepare to be seduced into masochistic submission.

Let's talk about the honey badger. It's a paradoxically innocuous name for a furry two-toned body and snarling mug that pursues the likes of lions and monitor lizards three times its size. Even more fantastical, the honey badger's favorite prey goes by the name of King F'ing Cobra. One of the most venomous snakes in the world. I don't think I'd even touch the molted skin of one of these things. But undaunted, the honey badger fearlessly pursues and pounces on them like a fat chick who gets a whiff of funnel cakes at a carnival. Of course, if the badger gets bitten he, unlike any other mammal, has the power to flush the poison from his system with a little nap before digging in to his feast. Pretty badass, huh?

"Badass" was the same feedback Honey Badger BBQ Sauce creators Paul, Chris, and Leigh were getting about their mouth-blowing condiment, a tangy BBQ sauce with teeth shaped like four habaneros per bottle, and a soul forged from a cunning blend of spices and honey that took six months to perfect. The honey badger became their icon, and Cobra Strength became their heat indicator.

The guys describe Honey Badger BBQ sauce as "not too sweet like most sickly sauces out there" and say that the heat of the habanero enjoys a slow build that "will cause the uninitiated to raise their brows, exhale through pursed lips, and exclaim 'Wow that's hot, but I like it.'" The bottle sports a honey badger entangled in combat with a king cobra, with sauce options including standard Cobra Strength, Triple Cobra Strength, and a special edition Golden Badger bottle of Triple Cobra Strength for BBQ sauce club members.

The Honey Badger BBQ sauce project ran on Kickstarter through August 31, 2012, with successful funding achieved. Now available for purchase, a single, 16-ounce bottle of Cobra Strength sauce runs $10, with bundles including various sauce strengths and T-shirts working up to $250. For example, if you would like to amp up to Triple Cobra Strength, complete with a fancy metallic label and its own ID number etched onto it, a bottle runs $60. This is because the guys produce only one batch of the triple gut-kicker a year. For BBQ fiends with deep pockets, $3,000 will earn you membership into the Golden Badger Club, which includes a 24-carat gold plated honey badger bottle filled with Triple Cobra Strength sauce. Only 5 of these will be made each year. The special edition bottle will ship with 10 sauce refills for the year, plus 10 more each subsequent year in conjunction with annual releases.

Nothing says Happy Valentine's Day better than a mini chocolate bar laced with a pepper hotter than the Carolina Reaper. The Cocoa Loco Choco Challenge from Fuego Box, in the spirit of Paqui's Carolina Reaper Madness...

Open your mind - and numb your mouth - to the hot umami bomb that is Fly By Jing Sichuan Chili Crisp. Made in Chengdu by Sichuan chef Jing Gao, this condiment is an oil-based cornucopia of flavor and texture they say...

"Bonne Maman" translates to "Good ol' Mama," and if my mama got me a 2021 Bonne Maman Fruit Spread & Honey Advent Calendar, I'd tell her she's a good ol' mama indeed...

McCormick has launched an Old Bay Hot Sauce just in time for the Super Bowl, and my Spidey Spicy Sense tells me it's hot in more ways than one: at printing, when I tried to access the McCormick online store to purchase...

Betcha can't eat just one. Maybe not even one bite. Paqui says its Carolina Reaper Madness Chip is made with the hottest chile pepper on earth, and possibly in all the circles of hell. It's so hot they package them in...

The gobble, gobble of the holiday season is in full swing! But if you would, take a quick pause from stuffing your own piehole to consider how you might win this year's gift exchange by stuffing the pieholes of others...

B**ch is always gonna have your honey with a Flow Hive, because this Langstroth-style cedar beehive can be summed in 3 words: Honey. On. Tap...

Get ready for the uncontrollable "O" mouth, exhalations of fire, and streaming tears of blissful discomfort only a few Victoria's Secret models, and Bhut Jolokia, the world's hottest pepper, can extract from your otherwise...

First We Feast's Hot Ones brings me so much joy. Who'd have thought feeding celebrities 10 hot-sauce-slathered chicken wings of increasing spice levels, up to Scoville units that make them swear and sweat and snot all...

Not quite as good as tumbling your meat into diamonds, but way better than waiting 12 hours for it to marinate. The Chef's Elite 15-Minute Marinator uses a vacuum system and a (literal) drum roll to (literally) turn your...

Satan's Blood Hot Sauce comes in a "blood vial shaped bottle with 800,000 Scoville units of pepper extract." Yeah, I can see that. I can also see a cock & balls ready to spew a scorching, blinding, fiery-hot death onto...

Call them the building blocks of bee conservation. Bee Bricks, a clever contribution to the endangered solitary bee population, are filled cavities that provide a safe place for individual bees to lay their eggs. They...