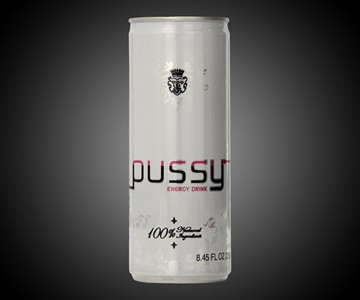 So many ways to interpret the Pussy energy drink. Does it give men in need the bravado to get some? Reinvigorate the nether regions of women who aren't in the mood? Inject some downtown youthfulness into cougars on the prowl? Or is Pussy simply the energy drink equivalent of Apollo Peak's cat wine?

According to its manufacturer, Pussy is a natural, caffeinated soda that is "fresh, clean, and highly enjoyable like only Pussy can be." Oh. So really it's just a gimmicky name slapped across a can of sodie for shock value. Reminds me of a book called Syrup in which a broke marketing grad comes up with a brilliant idea for a beverage called F*ck that's made of Who cares? and tastes like Who cares? and pitches it to Coca-Cola. And oh F*ck do they love it.

This Pussy, probably unlike most you have encountered, contains the natural, fresh fruit flavors of white grape and lime. Its caffeine kick comes from Guarana.

Hostess Snack Cakes Bottled Iced Lattes bring one stop shopping for coffee and a pastry to a kitchen or office break room near you! The cakes even come pre-dunked! I'm trying to decide whether I'm delighted or disgusted...

Throw away the EL wire and chemical-laced makeup. If you want to look like a club kid, Doctor Manhattan, or a walking biohazard, come the end of 2015 all you'll have to do is gulp & glow. On top of injecting your blood...

We wondered too, but the answer is no. blk. black bottled water is not part of an SNL skit ŕ la black caulk or Colon Blow. It's a real artesian spring water from aquifers in Canada's Sandiland Forest Reserve. And it takes...

We've seen levitation around here before. A lot. In speakers. In lamps. In freakin' bonsai trees. But the Levitating CUP still make

The Can Cannon Soda Can Launcher

Big & Rich recommend ladies save a horse, ride a cowboy, and the Can Cannon recommends cowboys save a bullet, fire a shook-up sodie can...

I mean, I'm fine getting my own glass of SunnyD, but I guess if you really want to give me some of yours, alright. Go ahead and Wave it over...

Red Bull creator Chaleo Yoovidhya died in March 2012, leaving behind an unparalleled energy drink phenomenon and industry. Not since Coca-Cola and YouTube spectacles involving numerous tabs of Alka Seltzer has a carbonated...

I hope the Breville 3X Bluicer is as fun to use as the word "Bluicer" is to say. Over and over again in my head, as if it's a whisper from the gods that I should name my firstborn Bluicer, or buy a blender and juicer...