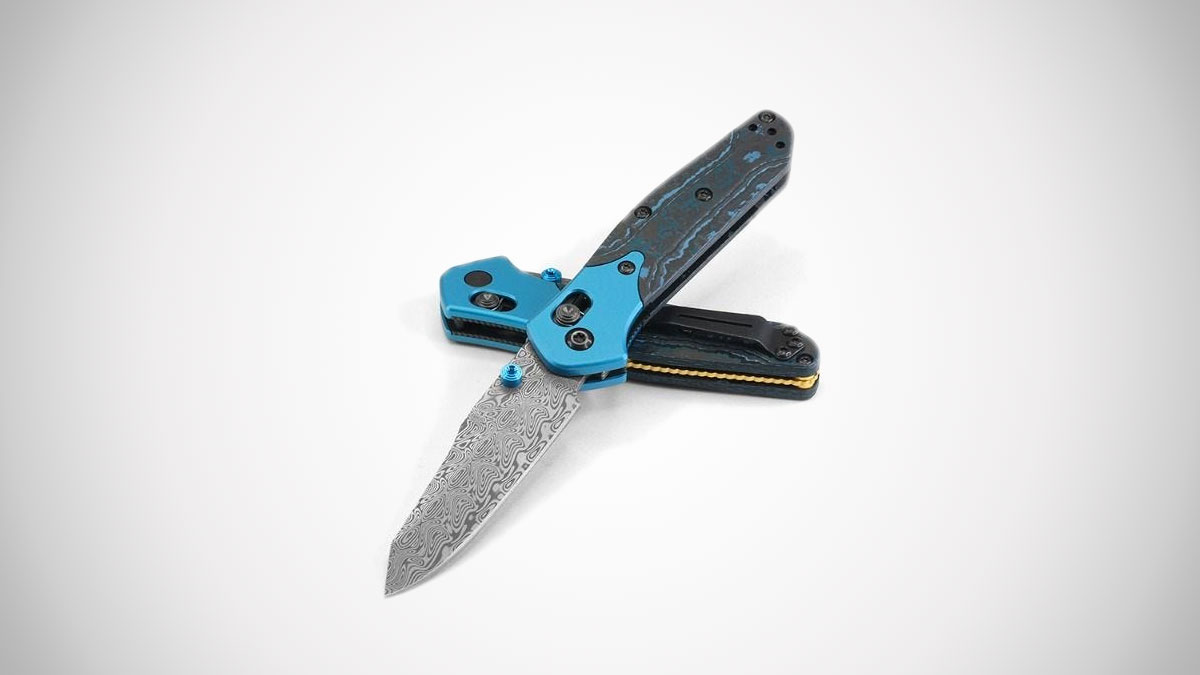 From the icy depths and treacherous squalls of the seas comes Benchmade's latest addition to their 940 Osborne family, the 945-221 Mini Osborne. A limited edition set to release this spring, it's a Gold Class pocket knife worthy of the gods. Or at least, one made to entice them.

One of the most standout features of this Mini Osborne is its Damasteel blade pattern, a Benchmade debut called AEgir. AEgir is a personification of the sea in Norse mythology, and a clear inspiration for both the blade, with its swirls and waves, and the fat carbon "Arctic Storm" handle, with its bright blue accents.

The limited edition Mini Osborne incorporates Benchmade's classic reverse tanto blade shape, which comprises 2.92" of the knife's overall 6.76" length when open. Closed, its 3.84" length and 2.24-ounce weight should slip easily into a pocket to become your latest...and possibly only...piece of Old Norse EDC.

Whether you're warning someone not to provoke you, or getting ready to do some provokin' yourself, the CRKT Provoke First Responder is a morphing, karambit-style pocket knife at your service...

While no one likes having a wrench thrown in their plans, it does seem you dudes enjoy have a wrench to accompany them. I bring you this titanium wrench pocket knife multi-tool hot on the nuts and bolts of the Ka-Bar...

If you think super thin is super fly, check out Zootility's ST-2, the brand's Super Thin folding pocket knife with a thickness of just 0.125". Oh and also, keep your opinions to yourself because I am sick of skinny jeans...

It's all smash 'n' score whether you're the recipient or the giver of a BRIK concrete block gift. With a BRIK, the packaging is half - maybe more - the fun, though those who take a BASH sledgehammer to their gift wrap...

TILI. Rhymes with "lily." But this fixed-blade pocket knife ain't no pretty, sweet-smelling flower. Well I mean, it is kind of pretty, and while I doubt the blade has any sort of floral aromas to it, if you like the scent...

Despite the name "Jukebox" it's not so much the 50s diner as it is the 50s barber shop Gerber is giving a nod to with their Jukebox gentleman's knife. The EDC piece is fashioned after the look of a master shaver's straight...

Marc Liss hand makes his Japanese kiridashi pocket knives, or dashis, from recycled files. He says, amongst knife makers, files are considered to be forged from some of the best steel there is, often 1095 or W1. So in...

Why carry a simple pocket knife when you can carry Victorinox's Swiss Champ XXL and make it a whole pants knife? The 73-function multi-tool is definitely a Swiss Army Knife ready for nearly any task you need a hand with...

Pull the trigger on this gun and get a slash instead of a bang. Ruck Gear makes and engraves gun shaped pocket knives to order, with initials, names, or other text, in your choice of font. They're a simple, but still...

Dude 1 wants to take it out back, Dude 2 flashes a Firecracker Mini out the front, and together they decide to buy each other a beer and just stay inside. Firecracker Mini Double Action OTF Knives: Creating Spontaneous...