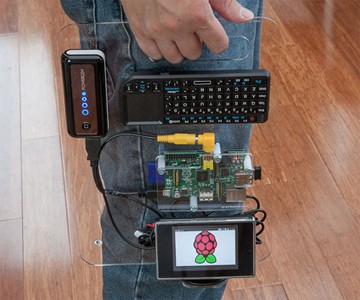 The Raspberry Pi sets the bar, and then raises it. Twice. Bar: The Raspberry Pi is a credit-card sized computer that plugs into a TV and keyboard to produce full PC functionality in the form of spreadsheets, word processing, games, and HD video projection. Raise 1: The Raspberry Pi was created by the Raspberry Pi Foundation, a charity with the goal of giving schoolchildren and areas lacking the power and hardware needed to run a traditional desktop computer access to affordable, capable, and contemporary technology. They want kids worldwide to have the tools they need to learn programming. Though it's OK if adults support the cause by buying one of the computers too. Raise 2: The Raspberry Pi Model B Board, replete with 512 MB of RAM, 2 USB ports, and 10/100 wired Ethernet costs around $35.

As processors designed for mobile devices have become more powerful and cost-effective over the past decade, the logistics of manufacturing a $35 do-it-all computer have gone from ambitious and unrealistic to ambitious and realized. In a 3.37" x 2.2" x 0.8" package comes the basis for doing everything from drafting a hi-tech presentation to building an interactive robot. The Raspberry Pi's SoC is a Broadcom BCM2835 containing an ARM1176JZFS, with floating point, running at 700Mhz, and a Videocore 4 GPU. The GPU can deliver BluRay quality playback and is capable of 1Gpixel/s, 1.5Gtexel/s, or 24 GFLOPs of general purpose compute, plus houses a host of texture filtering and DMA infrastructure. Basically, its graphics prowess matches that of Xbox 1's.

Raspberry Pi Model B packages include only the Board itself--a power supply and SD card (including those that are preloaded) must be purchased as add-ons, but are available from the Foundation's two designated vendors, Premier Farnell/Element 14 and RS Components. Debian is the default operating system recommended during distribution, though it can be replaced with another ARM Linux distro if desired. SD cards store the Raspberry Pi's OS, and are required to boot (a USB HD can step in thereafter).

Complete setup instructions can be found on the Raspberry Pi Website, as can various SD card image downloads, an extensive FAQ page, and forums for R-Pi computer beginners, advanced users, and enthusiastic members of the product's community.

Simple as LEGO, powered by Pi. The Raspberry techie kind, not the 3.14Infinity kind. Or the fruit kind for that matter, but a DIY mini computer powered by flaky-crusted dessert might be the one element to rocket launch...

Your focus, your drive, your QWERTY fingers, they're on fire! Make sure the laptop you're using to execute your plans for world domination isn't too with MOFT's new Cooling Stand, an ultra-thin attachment for your laptop...

If you're using a USB Kill stick you're either pen-testing, trashing your old PC for recycling, or being very, very...very evil. Come on now, I know he cooks eggs in the staff room microwave, and eats beef & bean burritos...

It's a professional jiggler! No, not Santa Claus. No. Not a stripper. This is a Mouse Jiggler. And it's got nothing to do with bellies and boobies. Though, like the belly and boobie jigglers, the Mouse Jiggler is here...

Slidenjoy's Le Slide modular modular laptop screens somehow make threesomes work-appropriate productivity enhancers, without sacrificing any of their sexiness. The pair of add-on screens affix to the back of most any...

I know you've been on the computer all day, and are sick of typing emails, and presentations, and explanations, and proposals, but...hello. In all lower-case cursive. Or maybe just a smiley face icon named Happy Mac...