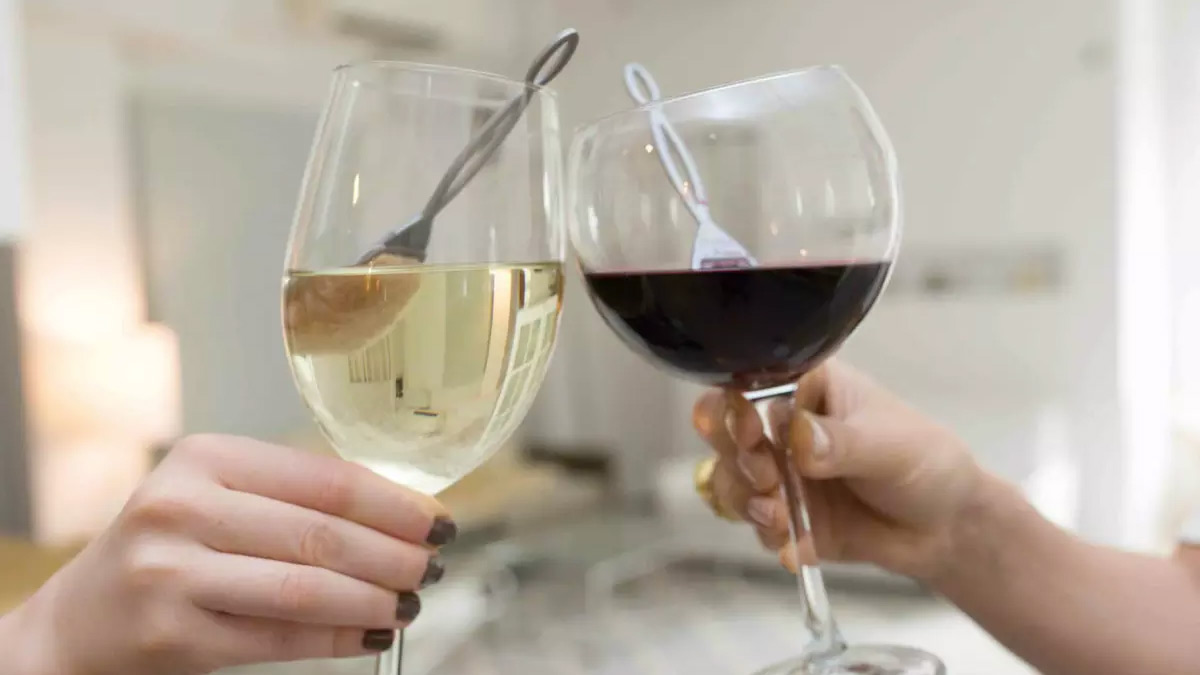 I got classy at a recent holiday party and drank wine all night. She-Ra: Princess of Power told me the next day it was "the cheapest, nastiest Malbec they're probably legally allowed to sell. Like a bottle of backwash wine." Know what else told me that? The searing pain on the verge of exploding through my forehead like a spear thrown by the Night King for the next 36 hours.

That hangover was tied for the worst hangover I've had all year. I would have done anything to get rid of it. And, with New Year's Eve approaching, I'd even go so far as to dunk a Wand in my glass to prevent it.

The Wand is a wine filter that says it removes both histamines and sulfite preservatives from glasses of red and white before you drink them. I don't know if it works, and I'm not stoked that each filter looks like a cross between a teabag and a fly swatter, which is sure to earn me tend kinds of shit from Cornelius, but, again, Night King's spear through my forehead. Worth all of it if The Wand contains the fire that can defeat the ice.

Swirling and soaking a Wand filter in a 6-ounce glass of wine for 8 minutes can remove up to 95% of histamines and sulfites. Yeah, 8 minutes. And you have to filter every glass. And you can't reuse the same filter twice. Maybe the real hangover-preventing magic in this Wand is that you're just waiting so long in between drinks you end up going home having consumed half of what you would have otherwise.

That said, you can get partial histamine and sulfite removal in as little as one minute, with a recommended wait time of 3 minutes to achieve a banishment of 65%. After doing its duties, The Wand leaves nothing behind in the wine, and supposedly brings out its "natural taste and health benefits." Which makes me think it definitely F's with the flavor, but again, Night King's spear through my forehead..

The Wand's filtering properties are intended to help alleviate wine headaches, congestion, facial flushing, and the general hungover feeling of the day after.

Chill out. With a wine chiller, and all 6 bottles of wine contained within it, courtesy of this mini wine fridge from Wine Enthusiast. The oeno-fan brand's 6-Bottle Countertop Wine Cooler does exactly what its name say...

LifeStraw, a Time Magazine Invention of the Year Winner, removes a minimum of 99.9999% of waterborne bacteria. In areas plagued with dirty and unsafe drinking water, it filters up to 1,000 liters per apparatus into potable...

My collection of 17 of the best boozy gifts for 2020 isn't just about the booze itself. The beer, the wine, the liquor, sure, there's some of that. But there's also a lot of what you're gonna put your booze in. How you're...

To call the JoGo a portable coffee & tea brewing straw is a bit of a misnomer. At least the way I initially read it, which was the way that made me think this 7.8" x 0.5" stainless steel straw had some sort of coffee...

Scottish Beithir Fire is 75% ABV, or 150-proof beer. Nope, not joking. Yep, pretty sure that makes it the World's Strongest Beer, a title Scotland's 88 Brewery has now usurped from Scotland's Brewmeister, and their 67.5%...

The FartVac - Suck Up Smelly Farts Before They Escape

As excited as I know you all are to stick the FartVac up your butt in the name of sucking up smelly farts before they escape into the room, and noses of your family / date / coworkers / fellow citizens waiting at the...

Brew Glitter. Dude. I have enough trouble getting glitter out of my house, my clothes, my - shiver - car if ever it encounters them, and now? Now? You're asking me to put myself in a position where I have to get glitter...

Oh, Dad. You're such a sage. A simultaneous student and master of life. Willing pawn of the golf course, declared slave to the fishing pole. A magnate at the office, a maestro on the grill. Cigar aficionado, connoisseur...