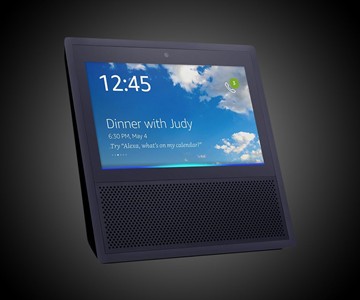 Alexa! Show me the money! I don't know what will happen if you give an Amazon Echo Show that command; she'll probably be like, Sorry, I don't understand, which is pretty much her Echo audio version self's response to everything I ask or tell her. But if you have more normal requests, like Show me my sleeping baby and Show me the lyrics to "The Humpty Dance", this video-added version of Amazon's smart speaker and voice-controlled virtual assistant is at your eyes' service.

Echo Show adds visuals, and a touchscreen, to some of Alexa's existing capabilities--scrolling song lyrics as music plays, pulling up weather forecasts on the Show screen--plus adds new features, such as playing YouTube videos and video flash briefings, and allowing owners of Echo Shows or the Alexa App to make hands-free video calls to one another.

The Echo Show is a standalone device, with its own speakers and 8 at-your-service-sir microphones, so you don't need to own an Echo the First or Echo Dot already to use it. Of course, if you do have one of those, you'll end up with Alexa sisters, the younger prettier and more popular than the elder. You can keep them both and Echo out in different rooms (your existing settings, preferences, playlists automatically upload to a new Echo device linked to your Amazon account, but you can't sync them to, say, play music or set a timer together) or you can sell the old ugly Alex on Craig's List.

Hear me now and believe me later, Google Home Muscles is here to pump! You up! Or at least, like, set a timer and play "Sexy and I Know It" while you work out on your own...

Blink and you might miss it, but your Blink Floodlight and Outdoor system, a wire-free security camera and pair of 700-lumen motion-triggered LED lights, will see, and record, it all for you...

Although the aesthetics of the shattered screen look are starting to grow on me, I do prefer the functionality of smartphones whose parts are intact. And the very nature of touchscreens--that to work as intended they...

JoyFous is a retractable rolling shower screen made for 3-wall bathtubs. It's mold-resistant, watertight, inexpensive, and here to absolutely ruin showering. Doesn't JoyFous know half the fun of climbing in a tub and...

The Hushme is like the Baby Muzzle for adults! Of course, they spin it that the (Bane-approved!) voice mask and muffler serves wearers and their privacy while taking phone calls in public, not that it protects all the...

AIRTAME believes that "everyone should be able to show any content from any computer on any screen - wirelessly." Given that last time I tried to hook up my laptop to my friend Cornelius' TV to show him a slideshow from...