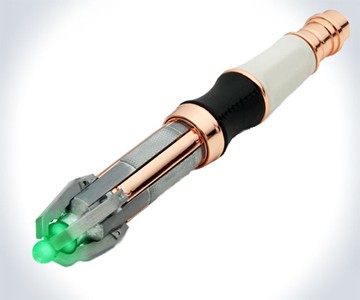 While I'm pretty sure the Sonic Screwdriver in remote control form cannot eradicate the entire E! Network or track aliens of the Zooey Deschanel persuasion, it can make brandishers feel like pretty bitchin' Time Lords while using it to switch to more respectable programming on AMC or SyFy. The Doctor's toolbox favorite beams to Earth in early September as a gesture-based infrared remote that, true to the Whoniverse, is clever enough to learn the operation codes from almost any regular controller. Use the screwdriver to crank up your iPod with clockwise and counterclockwise rotations, flip between Breaking Bad and Alphas with up-down flicks of the wrist, or pull back and eject that shizit movie with Will Ferrell and Marky Mark from your DVD player.

The Sonic Screwdriver Remote Control can elicit up to 13 tricks with each of its three memory banks, for a total of 39 codes divvied amongst your favorite electronics. Code 40 puts the science fiction television series prop replica for which you doled out $99.95 into full-metal lockdown, so sons with no legitimate claim to its powers cannot relish or abuse them. And speaking of powers, the Sonic Screwdriver also switches from FX Mode for invoking 13 authentic Whovian sound effects and one celestial green light effect, to Quiet Mode for ejected-from-the-TARDIS-in-deep-space silence and darkness.

Sonic Screwdriver Remote Controls are forged from Skaro's finest hand-polished die cast metal, ABS plastic, soft-touch plastic, and copper plating. Pursuant to its ginger removal from the box and presentation display stand, plus 20 minutes of cuddle time, Doctors of the home entertainment system can follow Screwdriver's step-by-step setup technicolor instructions to program codes and learn how also to use it with spoken prompts. Three AAA batteries are required. Screwdriver dimensions, according to retailer ThinkGeek, are 2.33 x 10 -17 light years long.

Maybe the best quote a company president has ever made about their product comes from C3 Custom Cooler Creations president, Scott Seljan. In speaking to The Milwaukee Sentinel of his Remote Controlled Rover Coolers, Seljan...

Utilitarian cosplay. How many occasions do you have to use those two words together in a sentence? (And can you say them 5 times fast?) Ever since I got the ix-nay on wearing my "formal and "functional" Mongol armor suit...

I know. There are only so many multi-tools one can own. But only one multi-tool one can own also impersonates the precious, innocuous fish who died on you (possibly repeatedly) during childhood. What up, Guppie Multi-Tool?...

Take a gnashing bite out of your next repair or DIY project with the Denture Screw & Drill Bit Holder, an equal parts clever and disturbing 3D print from Etsy vendor MacGyver Dood.

Each tooth socket in this vibrant...

Correction: Sorry dudes, this is not the Addams Family set house, inside or out, but a real Australian home that has remained unchanged since its late 1800s construction, and looks like a creepy mansion shacking up an...

While being on the receiving end of a buzzing, pesky winged bug's attentions can prompt minor fits of rage, I feel like if I could control the insect, and make it evoke these sentiments and actions from those who are...