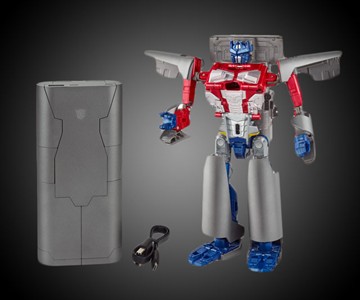 Straight outta HasCon: The Transformers Optimus Prime Converting Power Bank! Hasbro revealed their geek's wet dream of a charger in July, but hauled it out in person Autobot for the first time at their HasCon convention in Rhode Island over the weekend.

Commercial sales through Hasbro will begin on September 20, 2017, but for those who want to get their nimble fingers on one of the first 6500mAh Optimus Prime, enterprising HasCon attendees are currently selling off theirs on eBay. Here's one listing. A simple "Optimus Prime Power Bank" search will turn up several others.

The fearless leader of the Autobots charges devices with the same triple-jointed flair he uses to fight the Decepticons. Packed into his standard backup battery brick he'll deliver 6500mAh of additional juice to most rechargeable devices. But if you want to turn your charging session into more of a spectacle, or just need something to dick around with while you wait for an extra bar, the power bank converts from gray brick to full-color and ready-for-battle Optimus Prime in 16 steps.

Once on the scene, Optimus Prime bears a blue-Energon LED sword, which you can light up and dick around with even more via the battery power you're supposed to be saving for the phone that will inevitably die right as you open the Lyft app for a ride home.

There's nothing particularly funny about the iWALK LinkPod Portable Charger, I can't not show some Fozzie the Bear love after seeing the name. So here goes: the LinkPod is a 4800mAh fast-charging power bank you can stuff...

I don't have a NOCO Boost X Portable Jump Starter, but I do have a different portable jump starter - a much cheaper, albeit less powerful one, by the way - and I gotta say, it has saved my negligent ass at least, like...

I see what you're doing here, Shargeek. I mean, it's hard not to with the see-through shell around your STORM2 portable power bank revealing all its inner workings and charging capabilities...

While it sounds like something Batman would be called upon to save the world from, Brunton's Hydrogen Reactor is actually an innocuous, albeit robust, deliverer of power to portable devices. It's a piece of scientific...

Don't you worry, Zens Liberty Glass Edition Wireless Charger, I see you. I do. I see you on the outside and, thanks to your transparent tempered glass surface, I see the 16 copper charging coils you got on the inside...

Thanks to Takara Tomy's Transformers x Canon EOS R5 Camera mashup, you can now use Optimus Prime to shoot people without consequence. They will probably even thank you for aiming the Autobot leader their way, though they...

What a piece of junk! Actually, I have no idea how well this Star Wars Millennium Falcon Wireless Charge Pad works, or how cool (or junky) it looks in person, but that felt like the right line from the film series to...

ThinkGeek should just pretend it's April Fool's Day any time they have an idea for a product and want to test out its potential for success on a focus group of, like, half a million people. The Flux Capacitor USB Car...

The BioLite Base Camp Stove uses wood both to power and make power. It will massage fruits of the forest into fuel for grilling hot dogs and charging smartphones. Similar to BioLite's original leaf-and-twig-powered Camp...