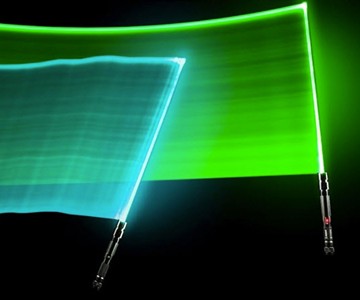 With both Comic-Con 2012 and Dude's S3 Arctic Laser Giveaway in full swing, how could we not bring you this feast of power, this champion of Cosplay, this intergalactic harness of pure Storm Blue or Ghostbusters Green lightning? Wicked Lasers presents the LaserSaber, a tubular attachment to their S3 Arctic or S3 Krypton that contains the beams' searing 1W output in a stunning visual circus both Harrison Ford as Han Solo and Harrison Ford as Rick Deckard would envy.

Here's how it works: When the laser is powered up, the LaserSaber's built-in optical element diffuses the released energy, which then enters another, internal diffuser tube for even distribution along the saber's blade. A metal sphere suspended permanently inside the diffuser tube moves by the power of Grayskull (and gravity), and collaborates with a magnet in the tip of the blade to create the beams' grow effects, and allow for smooth and spectacular transitions between utter darkness and brimming spear of light. (A transition, by the way, that garners instant street cred from ladies in the I Wouldn't Normally Date Him, but Holy Hell He's Wielding a LightSaber Department.)

LightSaber blades are made from 32" long, 1/8" walled polycarbonate tubes, courtesy of the USA. Though they look like the raddest toys ever, Wicked Lasers reminds us that given the highly dangerous, potentially-instantly-blinding lasers they house, they should be handled with care, and operated only in controlled environments by people wearing LaserShade safety goggles and not predisposed to acts of superlative jackassery.

Not to end on a negative note, but we're afraid sound effects are not included. LaserSaber users will have to supply their own.

I wish Saberforge would stop churning out new custom designs faster than I can squirrel away enough money from helping old ladies with groceries and skimming off the top of the church collection basket to buy them all...

Here's a 445NM Infinity Blue Laser Blaster by Tony Starks. I don't know if that's his real name or not, but if so now we know that having just one letter more than Iron Man makes you Laser Man. The trapezoidal-rhomboidal-pieced...

The World's Most Powerful Flashlight

It's the 21st century. Who buys a flashlight whose only capability is to shed light anymore? When I'm looking for my 1:12 scale Voltron in the attic, hunting zombies in the Ozarks, or self-examining my throat for the...

I grew up with fireflies. And by that I mean I grew up squashing them and rubbing their bioluminescence on my arms and legs so I too could glow like a superhero or anomaly of evolution. I never saw any blue ones though...

This Lightsaber Willy Warmer might be the finest expression of Grandmas's yarn I ever saw. Not a bad tribute to Star Wars either, presuming you've mastered The Force well enough to wield this saber once it's fired up...

You've seen Saber Forge's custom made lightsabers around here before. But now the company is taking to Kickstarter to give you the opportunity to do the custom making yo