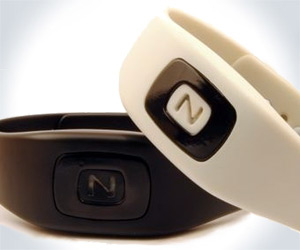 The Vibrating Ring Alarm Clock may still exist only in concept, but the ZBand, a vibrating bracelet alarm clock, is just a few steps away from silently and unobnoxiously rocking you awake without disturbing significant human, canine, or feline others in the bed. Making an indiegogo.com run for funding, ZBand creators Paul Griffin and Declan Leonard hope to bring their simple, yet sleek, idea and design into production early next year.

The ZBand reaches out to bed sharers, room sharers, and those who don't like being jolted out of slumber by a blaring eradicator of serenity with its app-controlled alarm system, which sends a user-selected strength of vibration to the wrist at selected times. It isn't the only vibrating alarm clock for the upper extremities out there, but when it comes to items that vibrate, when is there ever not a comprehensive line of makes and models? We even featured the LARK Silent Alarm Clock & Sleep Sensor, another nifty wakeup bracelet, just a few months ago. But unlike the chunkier LARK, the ZBand boasts low profile and simple, aesthetically pleasing visuals. Enough so with its superhero-looking "Z" insignia and its black and white models that one could easily be worn all day long for use as a time management tool. Or reminder to call your mama. At the $39 early bird, and $49 regular price, the ZBand is also half the cost of the LARK.

To use a ZBand, one need only download the company's Android app (it is currently available only for Android, but an app compatible with other smartphone models is in the works), pair it with the ZBand using Bluetooth, and press the alarm's "Connect" button to get up and running. The phone's interface displays 3 toggles for setting alarm times, frequency of alarms, snooze functions, and vibration strength. Once selections have been made, a "Save" button at the bottom of the screen beams the information to the band, which vibrates to confirm it has been received. Following confirmation, go to sleep.

ZBands last approximately 10 days on a single 30-minute charge. A charging cable is included with orders, and any macro USB charger--the standard for most Androids--will do the trick as well.

Griffin and Leonard are running their Indiegogo project through November 23, 2012.

February 2014 Update: While Zband funding was unsuccessful, its creators are still producing and selling them to the public through the company's Website--follow the link below.

The Boomerang Bed is the perfect name for Portuguese designer Joao Teixeira's piece of sleep-work-hang furniture. With its slidable work, dining, and streaming table, and relaxing, minimalist aesthetic, it's the bed...

FireSafe Outlets were developed by a New York City firefighter who's battled enough electrical fires to make your hair stand on end. Replacing the covers of your existing home or office outlets, FireSafe Outlets detect...

If the Ostrich Pillow doesn't provide enough coverage and anonymity for your power naps, how about the patent-pending Sleep Suit? Designed by Architect Forrest Jessee as an experimental medium for testing out Buckminster...

Varier's Gravity balans may not be new, but it remains Zero Gravity Recliner 1.0. The Original. Like Sean Connery as Bond. Like the Swedish version of The Girl with the Dragon Tattoo. Like Shannen Dougherty in 90210...

Ginger Foot Pads give new meaning to the expression, "Sleep it off." Or attempt to, anyway - reviews are mixed on how well these overnight detoxifiers really work...

I don't wear my heart on my sleeve, I wear my nap on my sleeve. The Sleepy Sleeves Wearable Arm Pillow is an alternative to neck pillows and giant ostrich heads for travelers and tuckered-out workers eager to grab some...