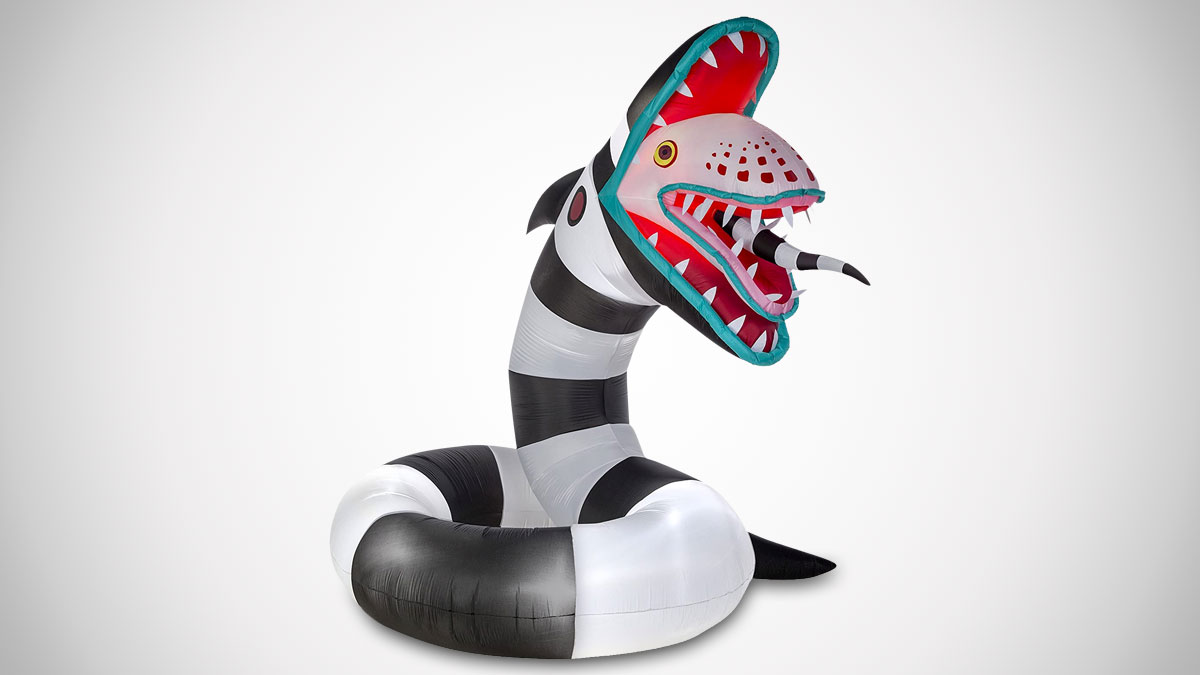 I've been walking by a 10' Animated Beetlejuice Sandworm every day for the last 2 weeks, courtesy of the best neighbor ever who installed one in his front yard, alongside this 6' inflatable black cat with rotating head and yellow LED eyes. Beetlejuice is one of my favorite movies, Halloween or otherwise, and I probably watched it 1,000 times as a kid. I even tried to convince my wife, She-Ra: Princess of Power, and a few of my guests to do the iconic ghost-possessed "Banana Boat Song" dinner scene with me at our wedding. But we were already having a pie eating contest for dessert, and She-Ra said an impromptu lip-syncing performance of "Day-O" that most people wouldn't even get was too much.

Ah well. If we have a dinner party around Halloween this year, maybe I'll inflate the 10' Animated Beetlejuice Sandworm in the living room so Beetlejuice will already be on everyone's minds, and then give it a go.

So like I said, I walk by a 10' Animated Beetlejuice Sandworm regularly, so have obviously see it up close and personal, and can therefore tell you this: it is spectacular. It looks exactly like the photos, hulking and lolling about overhead, with the animated portion of the inflatable being the sandworm's delightfully comical, and also somewhat unnerving, striped tongue. It's nowhere near as scary as the cat, though, so if you've got kids or are having a Halloween party you want filled with more whimsy than horror, the 10' Animated Beetlejuice Sandworm is your best inflatable bet.

Handbook for the Recently Deceased

This Handbook for the Recently Deceased contains 220 blank pages. I don't know if that's better or worse than Adam and Barbara Maitland's gibberish-filled version. Perhaps better, as at least buyers can fill this one...

According to the Handbook for the Recently Deceased, the Beetlejuice Terrarium is an accurately-depicted scale model of the Maitland-Deetz estate, replete with fence posts, dirt driveway, the foreboding, Burton-esque...

I can't think of a better way to greet my guests, guard my house, and make myself feel perpetually on the brink of getting the shit kicked out of me than the mounted head of Christopher Walken. The most disturbing former...

My mama's gonna dig adding these Zombie Kids to her front yard when she decorates for Halloween this year. I'll be a fan of them too if they scare away some of her trick-or-treaters, thus creating more leftover candy...

I should have found 13 cool products in orange & black to make this compilation even more true to the Halloween spirit I claim it embodies - or rather, disembodies. But I'm lazy, so you get 12...

The ultra-realistic Orangutan Costume looks like an outstanding choice for Halloween. Or, like, life, if you're craving something different. Because, as they say, in today's world, if you're tired of being a software...