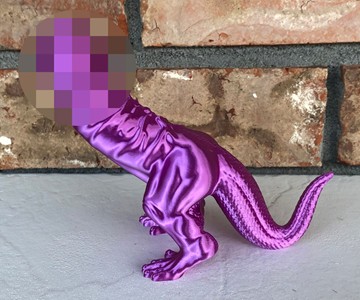 Sex toy, trophy for a dude who's a real T-Rex in the bedroom, (literal) gag gift, the 3D Printed Dickasaurus will serve you well as any of these. But me, I bought a 3D Printed Dickasaurus to leave anonymously for my boss as a Presidents' Day award for being a real mother fucking Dickasaurus. He can put it alongside the Eat a Dick Chocolate Penis I (also anonymously) mailed him for Valentine's Day, and the World Champion Dick Trophy I Secret Santa gifted him for Christmas. Not to mention the ICK Mug I saw his wife drop off one day.

Yeah I know, right? You'd think after getting all of this stuff from people who think he's a big fat dick, he'd make an effort to be less of a dick, but, true to the nature of true dicks, he just thinks they're hilarious jokes from his college buddies sent in good fun.

Based on your desired use for the 3D Printed Dickasaurus statues can come (but not really) in 2" and 4" tall sizes, plus a whole wad (albeit not shot) of fun colors.

It's the one body part P90X neglects. But before you reach for a Viagra to long-and-strongify your johnson, the Private Gym would like its shot at ripping your penis to shr-...uh... Maybe I'll go with a different idiomatic...

How to Live with a Huge Penis

Puberty was a really uncomfortable and difficult time for me. To the point that my mama went out and hired a shrink. At the end of the second session though he put his pen down and said, "Son, you really don't need me...

Cozy up next to the fire pit with a warm, cuddly...cock & balls?! This Crochet Penis Blanket from Naughty Mature Gifts will make you snug as a bug in a...er...opposite of rug on cool summer evenings and <a href="https://www.dudeiwantthat.com/blog/the...

"Make 2021 the year of ballsex!" Well, balldo, it's not the worst idea anyone's ever had. Plus, given all the horrible things 2020 was the year of, and the lackluster way 2021 has kicked off, a brand new ball-dildo that...

Is that a finger wiggling around in the Well Hung Naughty Christmas Ornament, or are you just happy to...defile the Christmas tree with a mock cock & balls to get some cheap jollies?...