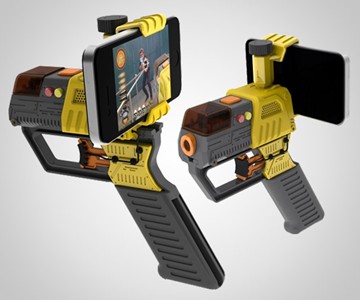 iPhone, iTouch, Android, all laser-tag-loving smartphone owners, get ready for the AppTag Laser Blaster! The app-and-apparatus duo that will turn your basement, your backyard, and your 3-mile stumble home from the bar at 3 a.m. into an intense competition of agility, precision, and tactical prowess. A shooter console attaches directly to players' phones for firing, and communicates activity via high frequency sounds imperceptible to mammalian ears (no Bluetooth or WiFi setup required). The phones then use WiFi to track shots, scores, and other stats, as well as display optional Augmented Reality objects, such as medkits, armor, weapons, and ammo packs. An infrared beam and sensor serve as the target and "laser", and each unit comes with both an IR sender and receiver.

The AppTag app is free, and will be available once the Laser Blaster unit ships. It currently uses 6 buttons: a pressure sensitive trigger switch, a reload button, and 4 buttons created for app developers to expand on game play features--think walkie talkies, sniper zoom, and weapon changes.

AppTag also comes with a pistol grip, though the mechanism is compatible with Nerf, Buzzbee, and most other accessory rails, for those who have already developed a superstitious devotion to a particular brand of toy gun. The included rubberized trigger, with wire and small adhesive clips, can adhere to a range of plastic shooters as well.

The Laser Blaster is the brainchild of Jon Atherton, who earned funding to launch his project via Kickstarter.

A full-on laser tag tournament powered by your iPhone. Good lord, what's next? An app that can fire paintballs? Transform saran wrap into a Slip 'n' Slide? Ooh, how about one that doubles as a soft-serve ice cream machine....

The only thing I know about Hackers is that Angelina Jolie makes a hot one, but according to Ninja Blocks, that's enough to qualify me for the job. Of a hacker, not Angelina Jolie. Though I could probably pull off the...