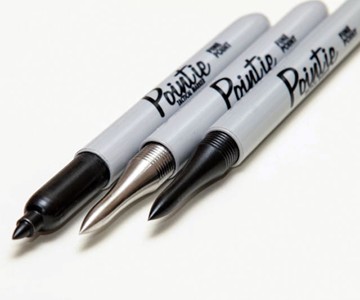 The Pointie. A "tactical marker" in name, but we both know what that's a euphemism for: stabbing things. Like glass during rescues. Warthogs during attacks. And whiteboards. Insolent, misbehavin' whiteboards.

We've seen alcohol concealed in sunscreen tubes and escape tools concealed in watch bands, so why not a hardened stainless steel spike concealed in a Sharpie tube? Creator Justin Martin says he designed the Pointie as a low-profile EDC item useful as a glass breaker, hiking/hunting tool, hole punch, engraving tool, pepper spray or knife substitute, anything...legal...you'd need a super sharp instrument of impalement for. The only thing the Pointie cannot do is write.

At its heart and jabbing soul, the Pointie is a solid length of 17-4, corrosion-resistant stainless steel rod, professionally CNC machined and hardened to condition H900. The tactical marker comes in 2 head styles, a Signature Pointie design, available just polished or in Cerakote Black, and the Concealed Pointie design (identical to a real permanent marker, but not a marker), available in Cerakote Black.

Pointies run as an IndidGoGo crowdfunding project through March 4, 2015. They are up for grabs by the 1s, 2s, or Pointie dozens to anyone 18 years and older.

You can watch the video to see the Gotcha Cap in action, or click here to watch a GIF of it showing a punk ass watermelon what's up. Issued by FAB Defense, the Gotcha Cap is a covert self defense tool (and swell hat!)...

With WFH culture likely here to stay, the Secret Whiteboard could be the best thing to come along since the act of gathering up all your crap and piling it in the closest closet when people come over (particularly those...

Phoenix Home Shield supports your quest to protect yourself from home intruders, carjackers, and grizzly bears. A pepper gel rather than a pepper spray, Phoenix Home Shield is designed to send a long-range stream of stay-the-F-away...

Unassuming. Low-profile. Comfortable. Able to shatter wrist bones. Just the combination of qualities I've been looking for in a baseball hat. The Sap Cap takes traditional headwear to the covert weapon level with its...

Five seconds into a look through Triangle Krav Maga's Website and Facebook photo stream and two things become abundantly clear: these cats do not F around; and I would like an application to become one of them. After...

Fidget toy meets self defense weapon in the TOYOGE Knuckle Duster. Even when you're wearing it, with its bright white-and-black carbon plastic composition, and funky shape covered in textures and imprinted accents, the...

Huh. Not sure how Buddha would feel about people co-opting his peaceful name and beads of spiritual exploration and meditation to make a necklace for whacking an attacker upside the head. But I can kind of see where Phoenix...