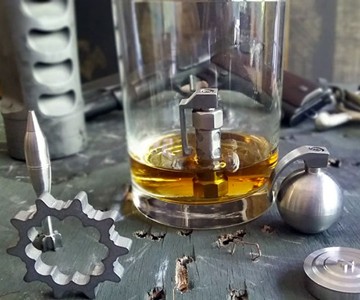 As a Platoon Leader in Ft. Carson, CO, Garrett Coker made a bet with a buddy on who would nab the higher Gunnery score. The winner would receive a bottle of Scotch. Coker won. He saw his buddy again a few years later in the Al Anbar Province of Iraq. Reminiscing about the story, and melting in the heat of the Middle East, they looked forward to the day they'd be home, enjoying another bottle of Scotch, sipped from tumblers, nice and cold.

The day came. While Coker waited for his buddy to head over, he threw a wedge bolt from an Abrams end connector and a bolt from a Bradley road wheel in the freezer to chill the Scotch without watering it down. Coker says his chosen alternative to ice, CARC-painted hunks of metal, will probably give them cancer, "but it was the best damned glass of Scotch I ever had."

Battle-Rattles are the whiskey chillers that emerged from Coker's experiences serving and drinking Scotch as a proud American. His sets of scaled military-themed replicas are all made in the US, designed by disabled veterans, and built from recycled scrap steel. Stainless steel that won't change the taste of your booze. Or give you cancer.

Choose from five 4- or 5-chiller sets, the contents of which include a mix of: 120mm Sabot Rounds; Mortar Rounds; M84 Stun Grenades; Land Mines; and Sprockets. Stick them in the freezer for a few hours, drop them in your glass (gently*), pour on the juice, and take a sip (carefully*).

*Battle-Rattles are battle-ready. These things have some major heft that you would not want slamming against a tooth. Maybe don't get drunk and chuck one at your friend Cornelius either.

Practice your nip grip with a Titty Tumbler from Jasmine Pots. And if you can really take hold of a golden nipple, and drink from its ceramic cup without fully cupping it, then you're ready for some next-level grabbing...

Pull the pin and Rocky S2V's Survival Grenade blows up a cornucopia of Mountain Shepherd Wilderness Survival School tools for the outdoor conquistador. Enveloped in 10' of military grade 550 paracord are everything from...

Pull the pin and let the propane do the rest. When Airsoft's Tornado Impact Grenades detonate, they scatter over 200 plastic 6mm pellets in all 3 dimensions under which your enemies might try to take cover. This means...

Sometimes, actions speak louder than worries. Putting together a Kim Jong Un nuclear attack preparedness package doesn't just give us something to do besides sit around and worry about North Korea launching missiles and...

Make that "Geizeer Super Cheap and Eco-Friendly Ice Cube Air Conditioner." (And it's actually pronounced "Guy-zer," not "Gee-zer," even though in my head it will always be the latter.) At an operational cost of less than...

Ice cold. Chilling. A slap in the face. Wim Hof. The Glacial Shower, a shower head that holds a block of ice and shoots out a near-freezing stream of water, is all of those things in the good way...and the bad...