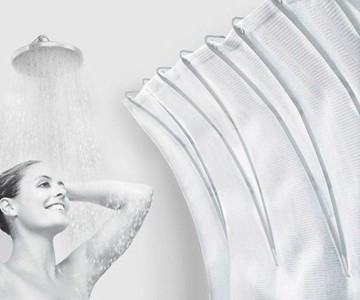 Curvit is a clip system that holds shower curtains in a concave position, thereby increasing shower space by up to 50%. It's a simple, inexpensive, and discreet solution that arrives pre-assembled and installs in 3 steps, no tools and no hard clips required. I think using a Curvit would also make us feel more like we're showering in a submarine, which has obviously long been a goal of all mankind.

Curvit makes shower curtains arc like an umbrella turned on its side. At the very top, where additional space isn't crucial, the clips curve inward. Then they segue into outward-bowing plastic Arches at about elbow level to achieve an effect similar to that of a curved shower rod. Which begs the logical question: then why not just use a curved shower rod?

According to Curvit inventor Patrick Raymond, curved shower rods are for schmoes. Or at least for hotels and new construction and people with the time to install them. Curved rods tend to run up to double+ the dollar price of the Curvit system, and up to sextuple* their time-and-effort price since the bastards can be difficult to install.

Raymond promises that Curvit clips will go from box to wide berth in a fraction of the time. He also says they'll prove to be superior at leak prevention due to their keeping shower curtains snug up against the tup and wall.

The Curvit system comes in colors Clear and Aqua.

*An estimate based on the fact that I'm a male, 7 seconds had passed, and I was thinking about sex.

Add another wall to my shower? If it's the Nest Wall, I'm down. This new shower caddy uses magnetized bottles and bins to keep all your hair, face, and body grooming products both easily accessible, and looking sleek...

A Tandem Shower? That's waaay better than a tandem bike. Or, like, a tandem trip to the art museum. Good on you, Boona, for coming up with a way for my wife and I to spend more quality time together that serves us both...

Ice cold. Chilling. A slap in the face. Wim Hof. The Glacial Shower, a shower head that holds a block of ice and shoots out a near-freezing stream of water, is all of those things in the good way...and the bad...

What's this, diatomaceous earth, you're in bath mat form now? Are you trying to challenge activated charcoal for the title of Strangest Naturally Occurring Substance You Can Use for Pretty Much Everything?...

The waste! The slime! The bacterial cultivation! And that's just from soap and loofahs, the things that are supposed to keep you clean! SudStud is a new shower scrubber, a soap sleeve and alternative to loofahs, washcloths...

Handso claims to be the world's first soap holder and sponge combo. A soap dish you can use like a sponge. A soap storer and body washer in one. I don't keep saying it in different ways to try to wrap my head around Handso...

Do you prefer a bath Ora Shower? Give me one of Vladimir Polikarpov's design award-winning leaf-like shower panels, and I'm an Ora Shower dude forevermore...

What if your bar of soap's slivered remains could transform from flat to stacked with no hassle, no waste, and no complex procedures or anesthesia? Simply and terrifically brilliant--like so many Kickstarter projects--Stack...

Well. I wouldn't argue it isn't dirty. I'm just not sure I care enough to go to the lengths required to make my hiney shiney. I think this cleansing brush set for the bunghole is geared towards women anyway, judging by...

JoyFous is a retractable rolling shower screen made for 3-wall bathtubs. It's mold-resistant, watertight, inexpensive, and here to absolutely ruin showering. Doesn't JoyFous know half the fun of climbing in a tub and...

In paradise, you take a Horizontal Shower. You lie on a smooth, warm slab of tile as 6 falls of water cascade like mermaid kisses onto your tired and thirsty skin. You choose their intensity and temperature, their pattern...