Cartoon Portrait of You 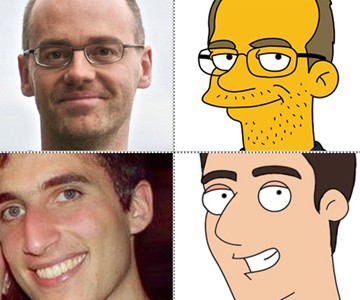 For as little as $5, Uruguayan artist Eliana Fernandez will send you a glimpse of yourself inside some of TV's most popular animated series. Kick off the return of The Simpsons and Family Guy, or bid farewell to Futurama with a portrait of cartoonified you.

Through Fiverr, an online marketplace of for-hire services starting at $5, Fernandez proffers basic head drawings for profile pictures, desktop photo frames, and official US Passports, plus gives clients the option of modifying $5 portraits with the addition of: a second person (+$10); the rest of their bodies (+$10); shadows and background (+$40); and/or a character from the cartoon after which they've chosen to be styled (+$20). For The Simpsons it's Homer, for Family Guy Peter Griffin, and for Futurama anyone from the show the buyer wants.

Simpsons stylization is by far Fernandez's most popular portrait offering, and at printing it carried a 14-day lead time for production. Rush orders are also available though for +$40 and 24 cans of Duff Beer.

Being a villain isn't cheap. So, like most actors, rock stars, and former Presidents, villains raise funds for the administration of havoc and execution of attempts to rule the world by selling out. The Villain Chair...

The original photobomb, credited to George Costanza on Seinfeld Season 9, Episode 7, "The Slicer," can now be yours. And not just yours in the hand, but yours in the face too! Shop Cafe Disco will personalize the iconic...

I still can't believe they once let snaggletooth Kirsten Dunst play Mary Jane Watson. Sideshow Collectibles' statue would have made a better ultimate girl next door than she did just kneeling there silent and unmoving...

The Star Wars boys give a pretty decent representation of Victorian times, huh? Jabba the Hutt almost looks dapper. Or at least less like the massive wart my friend Cornelius grew on the inside of his arm when he went...

Some would say the Teenage Mutant Ninja Turtles are making a comeback. LL Cool J would probably say don't call it a comeback, they've been here for years. Teri Hatcher and John Travolta would warn Leonardo, Michelanglo...

Instead of outgrowing your superhero, fairytale, and cartoon character childhood toys, let them mature with you. Preserve their magnificence, and thwart being labeled a creepy action figure nerd, with Evil Robot Designs'...

Need your video games and comic books on you at all times? Deja Neuf Heures has come up with a slightly different way to accomplish that: hand-painted cel shaded jeans...

Stripes or solids: what kind of panties make you want to make it rain? Aside from my girlfriend and my mama, I wonder how many ladies would slap me if I walked around town with a plaid upskirt shot printed on my umbrella...